How do you know that new appliance you bought won’t burn your house down? Take a look at any electrical appliance, and you’ll find it marked with at least one, and most often, several safety certification marks such as UL, DIN, VDE, CSA or BSI. Practically every electrical product that plugs into utility supply needs to go through a mandatory certification process to ensure it meets these conformity test requirements. Some examples include domestic and industrial electrical appliances, tools, electrical accessories, consumer electronics and medical electronics.

When you look through a typical safety test standard, you’ll notice it breaks down the various tests in two categories. “Type” tests are conducted on prototypes and samples of the final product or its individual parts and components, and are not generally repeated unless there are changes in design or materials. “Acceptance” tests are routine verification tests conducted on 100% of the products produced. For example, a typical Type test would be used to check the fire retardant properties of the plastics used in the manufacture of the product during development, while a Routine test would be carried out to check for high voltage breakdown or leakage and touch currents on the production line.

Nowadays, a majority of countries around the world adopt standards created by international organizations such as IEC, ISO, and ITU, then fine tune them to suit local requirements. The IEC works by distributing its work across almost 170 Technical Committees and Subcommittees which are entrusted with the job of creating and maintaining standards. One of these committees is “TC89 Fire hazard testing” whose job is to provide “Guidance and test methods for assessing fire hazards of electro-technical equipment, their parts (including components) and electrical insulating materials”. These tests are why we feel safe enough to plug something in and still sleep at night.

Practically all electrical products need to confirm to this set of tests as part of their “Type” test routine. This committee produces fire hazard testing documents in the IEC 60695 series of standards. These documents range from general guidelines on several fire hazard topics to specific instructions on how to build the test equipment needed to perform the tests. It’s interesting to see how some of these tests are carried out and the equipment used. Join me after the break as we take a look at that process. 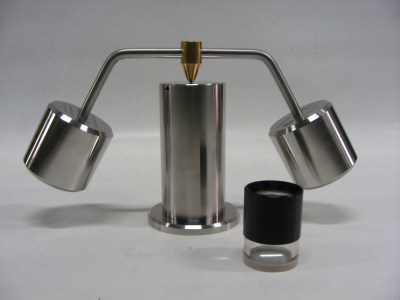 If your product gets really hot from a failure, will the enclosure safely contain the threat? IEC 60695-10-2 defines the test method and the associated test equipment needed to perform an abnormal heat test. The intent is to check that the insulating material does not deform or flow due to softening under elevated temperature and pressure so as to pose a safety hazard.

The equipment required to do this test consists of a 5 mm diameter steel ball which can be placed on the test sample such that a downward force of 20 N is applied. A heavy cylinder is used as a support platform to hold the test sample. The mass of the platform also helps prevent temperature variations during the test. Just under the flat surface of the platform, a drilled hole allows attaching a thermocouple probe to monitor the test temperatures, independent of the heating oven’s temperature control system.

The oven used is a regular laboratory or industrial oven, sufficiently large to hold the whole test apparatus and be able to maintain its internal temperature to within +/-2 °C up to a range of 200 °C. The last item required to complete the test setup is a means of measuring the indentation in the test sample after the test is over. A reticle magnifier — a x10 or x20 lens with a scale printed on it — is recommended in the standard, although a travelling (measuring) microscope can be used as well. 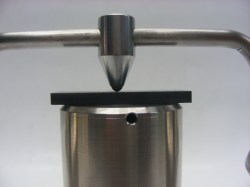 The test sample needs to be a 10 mm (square or circle) cut from the product being tested, and at least 2.5 mm thick. The platform and the ball pressure apparatus are placed in the oven until the whole mass achieves thermal equilibrium. The only variable in this test is the two different oven temperature settings used — either 75 °C or 125 °C — depending on how severe the expected conditions are for the product being tested. The test sample is then placed on the platform with the ball pressure apparatus bearing down on it. After an hour in the oven, the sample is removed, cooled to ambient temperature by dipping in water, dried, and the indentation produced by the ball pressure apparatus measured using the magnifier. The sample is declared acceptable if the diameter of the indentation on its surface does not exceed 2 mm. 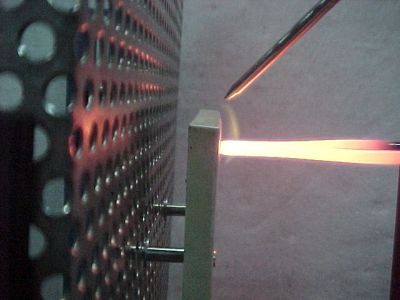 The IEC 60695-2-x series is a range of standards that cover glow wire test methods. The Glow Wire test is used to check if an insulating material will catch fire when exposed to a hot or glowing piece of metal such as a heating element or an overheated piece of wire (caused by short circuit or overload). Additionally, the test is also used to verify if the test material will stop burning once the source of heat is removed — thus checking its self-extinguishing property.

The equipment used for the glow wire test is fairly complex, and IEC 60695-2-10 specifically describes just the construction of the apparatus, while the other three standards in this series cover the test methods and evaluation procedures for ascertaining flammability and ignition for materials and products.

A 4 mm diameter piece of Nichrome (Ni-Cr) wire is electrically heated via a low voltage transformer, capable of providing up to 200 Amps. The temperature of the Ni-Cr “glow wire” element is measured using a type ‘k’ thermocouple which is embedded inside a blind hole drilled in the tip of the glow wire element. Earlier versions of the standard specified a 0.5 mm diameter thermocouple. The present version requires a 1 mm diameter, with a fall back to 0.5 mm in case of doubts regarding the test measurements.

The glow wire temperature is manually set by adjusting the primary voltage of the transformer. No feedback control or re-adjustment of the heating current is allowed — the system is open loop. The test sample is then brought in contact with the glow wire element, usually by means of a sliding rail. The rail arrangement is such that the test sample presses against the glow wire with a force of 1 N and prevents it from penetrating more than 7 mm after initial contact.

The test sample is kept in contact with the glow wire for a duration of 30 sec. If it starts burning, a height gauge is used to record the maximum flame height. A piece of wood, covered in tissue paper, is placed 200 mm below the glow wire. Any falling particles of the test sample ought to self extinguish before they hit the paper/wood and not cause any charring. At the end of the 30 seconds, the test sample is moved away from the glow wire. Within another 30 seconds, the sample ought to stop burning, and any dripping material should not cause the tissue paper to get charred. Check out the video linked below.

Evaluation of the results is covered in the three remaining documents in this series and is not a simple pass/fail conclusion due to the numerous factors involved. The only variable in this test is the allowed test temperature, which ranges from 550 °C to 960 °C depending on the severity to which the test sample will be exposed in real world conditions.

The IEC 60695-11-x series of Flame test methods and apparatus covers a range of flame tests at four separate intensity levels. These include the Needle Flame Test, a 50W flame test, a 500W flame test and a 1000W flame test. This set of tests goes a notch further from the glow wire tests by exposing the test samples directly to flames to verify that they will not propagate fire and are self-extinguishing. 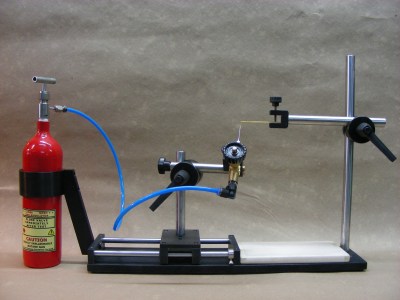 The Needle flame test uses a 0.5 mm bore diameter needle burner supplied with either Butane or Propane gas. The flame height is adjusted to 12 mm using a flow control valve, and a gauge is used to verify the flame height. As in the glow wire test, a piece of wood covered with a tissue paper is used to check for flaming, dripping material. The variable in this test is the amount of time for which the flame is applied to the test sample, ranging from 5 sec. to 120 sec. As in the glow wire test, the sample is supposed to stop burning within 30 seconds after the flame source is removed. In case the test sample melts and drips, the needle burner can be tilted at a 45 ° angle to stay clear of the falling molten material.

Flame calibration is performed by measuring temperature rise using a 0.5 mm diameter ‘k’ type thermocouple with a small copper block crimped at its tip. When the measured temperature goes from 100 °C to 700 °C within 23.5 seconds, the system is considered calibrated for use.

The other tests in the IEC 60695-11-x series involve higher intensity flames and have similarities with the UL94 range of horizontal and vertical flame tests. They use more traditional flame sources such as laboratory Tirrill or Bunsen burners and we will possibly try to look at those tests in a future article.

These fire hazard tests are just three of the numerous tests that each product needs to pass through before it receives a mark of safety approval. It involves the work of the IEC, the national standards bodies, independent test laboratories and the manufacturers and their suppliers to ensure the products that reach the markets are safe to use.