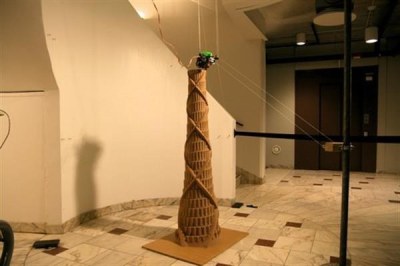 [Torbjørn Ludvigsen] is a physics major out of Umea University in Sweden, and built the Hangprinter for only $250 in parts. It follows the RepRap tradition of being completely open source and made mostly from parts that it can print.

The printer is fully functional, proven by printing a five-foot tall model of the Tower of Babel. [Torbjorn] hopes to improve the printer to allow it to print pieces of furniture and other larger household items.

[Torbjorn] hopes that 3D printing will not go down the same road that 2D printing went, where the printers are designed to break after so many prints. Open source is the key to stopping such machines from getting out there.

Thanks to [Jeremy Southard] for the tip!