Our story starts in 1761 with Ebenezer Kinnersley. In a letter to Benjamin Franklin he described experiments he did for testing if heat was produced by electricity. His power sources were electrostatically charged capacitors made with a case of bottles, or Leyden jars, batteries not having been invented yet. To get sufficient current to detect a change in temperature he needed to release all the stored charge at once through a spark gap. In one experiment (Expt. 11 in the letter) the current was sufficient to make a brass wire turn red.

Today we say that the wire became incandescent, it emitted electromagnetic radiation in the form of visible light as a result of the heat. He also arranged the experiment such that the wire was suspended with a weight at its bottom and found that it elongated by an inch when it got red-hot, the first indication that such heating can be destructive to the wire. He experimented with different diameter wires all of the same material and found that the larger ones showed no noticeable heating effect and concluded that this was due to the lower resistance of the larger ones.

The next step came with the publication of the invention of the battery by Alessandro Volta in 1799. This made possible testing with a constant current. Many experimenters were very quick to expand and improve on the battery such that by 1802 Humphry Davy had access to a particularly large one consisting of 2000 cells in the basement of the Royal Institution of Great Britain. He produced light by passing current through thin strips of platinum, platinum having a sufficiently high resistance but also a high melting point. But it still didn’t last long and wasn’t very bright.

Over the next 75 years many either experimented with incandescent light or replicated the work of others. James Bowman Lindsay of Scotland wrote that in 1835 he’d done experiments in sealed glass jars and that air was not required, though it’s not clear if that meant only that the jars were sealed or that he evacuated them to some extent.

In 1838, Belgian Marcellin Jobard experimented with a vacuum and used a carbon filament. In 1840, Warren de la Rue used a platinum coil in an evacuated tube but the cost of the platinum made it not commercially viable. The first patent for an incandescent light went to Frederick de Moleyens of England in 1841 for using platinum wires in a vacuum bulb, though he also experimented with carbon.

An American, John W. Starr, received British patent 10,919 in 1845 under the name of his business associate King for two types of light bulbs, one with platinum but not in a vacuum. The other used carbon filaments in a Torricellian vacuum, which produces a pressure of 10^-3 torr (1.3×10-6 atm). Starr died shortly thereafter and so did not pursue it commercially.

In 1872, Russian Alexander Lodygin (or Lodyguine) applied for, and was later granted a Russian patent for his incandescent light. The light used two carbon filaments, only one of which was in use at a time. When the first filament burnt out, an external commutator could be rotated to put the other into use. He at first filled it with nitrogen and then switched to a vacuum. In 1873 and 1874 he experimented with lighting on ships and for city streets and formed the Electric Lighting Company, A.N. Lodygin and Co. But he became involved with socialist ideas and eventually had to leave Russia.

There were many other inventors leading up to and including the 1870s but none produced bulbs whose filaments lasted long enough to be commercially viable, many of them introducing techniques such as Lodygin had, putting more filament into play as it was consumed.

It’s hard to say if there was any aha moment that finally lead to a commercially viable light bulb, though if there were big contributors they were probably the Sprengel mercury vacuum pump, invented in 1865, allowing a higher vacuum, and longer lasting power sources.

Joseph Swan, a British chemist and physicist, did experiments in the 1850s and 1860s but gave up for those two reasons, an inadequate vacuum and shortage of power. But with the invention of the Sprengel vacuum pump, Swan started up again in the 1870s and by 1878 was able to develop a bulb that didn’t blacken inside. It was granted a British patent in 1880. That bulb used a thick carbon filament from arc lamps and lasted 40 hours. However, the low resistance meant it needed high current and thick wires to feed it, making it not commercially viable.

He then experimented with “parchmentised” cotton thread, treated with sulphuric acid. It had the appearance of metal, was strong, durable and at 0.01 inches in diameter could be formed into a 1/10th of an inch spirals. With 100 volts it provided an output of 60 candle power. He obtained another patent on November 27, 1880.

At this point he began lighting places, starting with his house and powering it with hydroelectricity, the first house in the world lit with electric light. After starting his company, the Swan Electric Light Company Ltd., that was followed by other dwellings and landmarks, including the Savoy Theatre with 1200 lights as well as the Law Courts in London.

However, there were still problems with the cotton filament including that any variation in thickness caused uneven heating, making it useless. He found a solution to this by removing the nitrous from nitro-cellulose (cotton is almost pure cellulose), dissolving the cellulose and extruding it as a very fine thread. This he also patented.

Independently of Swan, in 1878 Thomas Edison also began experimenting with incandescent lighting, applying for his first lighting patent and forming the Edison Electric Light Company that same year. He too used the Sprengel vacuum pump. He worked with both carbon filaments and platinum but settled on carbon. His first success on October 22, 1879 lasted 13.5 hours. After working on it further, he filed his most famous lighting patent on November 4, 1879 and the patent was granted in 1880. It was after this that Edison and his team realized that a carbonized bamboo filament light lasted 1200 hours. It was also in 1880 that Edison lights were installed for the first time outside of Edison’s laboratory on the SS Columbia, a cargo and passenger steamship.

Unlike Swan, who powered lights with generators dedicated to the locations where they were used, Edison was installing electric generating stations for whole neighborhoods. As such he had both a long-lasting incandescent light and the means to power them continuously.

As you’d expect, Edison had patent disputes, perhaps the best known one regarding William Sawyer, who had similar patents from 1877 and 1878, predating Edison’s. But Sawyer never managed to make a lasting light and the dispute was eventually settled in Edison’s favor. Edison avoided a patent dispute with Swan in Britain by merging the British Edison Company with Swan’s in 1883 to form the Edison and Swan Electric Light Company, commonly known as Ediswan. Another well known patent that Edison bought out was that of Canadian inventors Henry Woodward and Mathew Evans who, in 1874, were granted a patent for their bulb which used carbon in a rarefied gas-filled glass tube, the gas being nitrogen.

The Light Bulb We Know (Or Knew)

Alexander Lodygin, whom we mentioned above from 1872 and who had to leave Russia, didn’t stop experimenting at that time. He was granted a few US incandescent light patents starting in 1886 and also had patents in France, Germany, England and Belgium. In the 1890s he experimented with metallic filaments and is said by some to be the first to use tungsten filaments. Tungsten filament lights were brighter and lasted longer than carbon filament lights.

However, on December 13, 1904 it was Hungarian Sándor Just and Croatian Franjo Hanaman who obtained a Hungarian patent for the tungsten filament light bulb. They licensed the patent to Hungarian company Tungsram which produced and marketed the light bulbs. In 1906, William D. Coolidge, while working for General Electric Company, found a way to make ductile tungsten from sintered tungsten which was then made into filaments. And in 1911 General Electric began selling the filaments in light bulbs.

Regarding the use of inert gas in the bulb instead of a vacuum, we’d mentioned above that Alexander Lodygin, and Woodward and Evans had experimented with filling bulbs with nitrogen. However, it was Irving Langmuir in 1913 who discovered that by filling a tungsten filament light bulb with an inert gas such as argon, the lifetime of the tungsten filament could be lengthened significantly. And in 1930 Hungarian Imre Bródy designed a way to get krypton from air and thereby first replaced the argon with krypton. 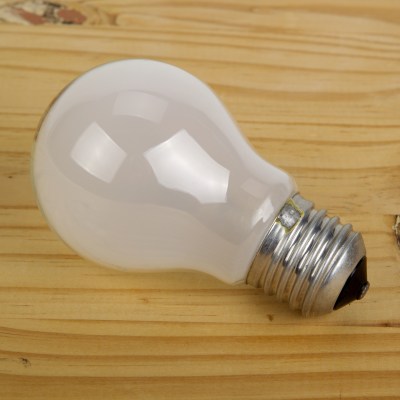 In 1917, Burnie Lee Benbow found a way to manufacture coils of coiled tungsten filament and in 1921 Junichi Miura, while working for Hakunetsusha,a predecessor of Toshiba, created the first bulbs using the coiled coil filaments.

Finally, in 1924 American chemist Marvin Pipkin patented frosting the interior of the bulb without weakening it and in 1947 he patented coating the interior with silica giving us the bulbs that give off a more diffuse light that many of grew up with.

And so to answer the question, who invented the light bulb, all of the above did along with a few more, though those are the highlights.

However, that doesn’t mean there isn’t still room for us hackers. Check out this DIY incandescent light made using a Dom Perignon champagne bottle or this CO2 filled one in a jar. It’s nice to see in this age of CFL and LED light bulbs that there’s still a glimmer of light left in the story of the bulb that first so brightened our lives.