When operating any kind of hydroponic farming, there are a number of lighting solutions — few of them inexpensive. Originally looking for an alternative to the lighting of IKEA’s expensive hydroponics system, [Professor Fartsparkle] and their colleague prototyped a rail system that allows clip-on LED boards for variable lighting options. 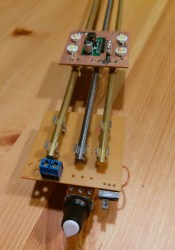 Taking inspiration from wire and track lighting systems, the key was the 5mm fuse holders mounted on the bottom of the LED boards. Snipping off their stopping clip makes them easy to install and remove from the mounting rails. The rails themselves double as power conduits for the LED boards, but keeping them out of the way is easily done with the variety of 3D printed hangers [Professor Fartsparkle] has devised. Lighting is controlled by a potentiometer on the power injection board, as well as any home automation control via an ESP8266.

[Professor Fartsparkle] asserts that the boards can be slid along the rails without any noticeable flickering, but they do suffer from heat dissipation issues. That aside, the prototype works well enough that the 3W LEDs can be run at half power.

This is an ingenious — and cheap — workaround for when sunlight isn’t an option, but you are still looking for a solution capable of automation.