Kirchhoff’s voltage law (KVL) says that the voltage around a loop has to sum to zero. Take a simple example. A 12V battery has a 12V light bulb across it. How much voltage is across the bulb? 12V. If there are two identical bulbs they will still see 12V across each bulb.

You can simulate this circuit to see the effect. The loop with the two bulbs has 12V across it and each bulb gets half because they are identical. The right-hand path has different voltages but they still have to add up to 12. 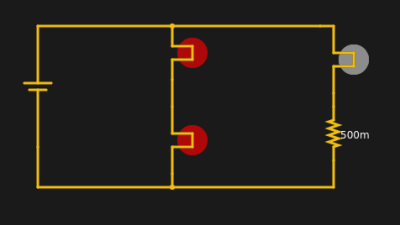 All by itself, KVL wouldn’t be very useful, but there is a principle known as superposition. That’s a fancy way of saying that you can break a complex circuit up into pieces and look at each piece, then add the results back and get the right answer.

You can use these two laws to analyze circuits using nodal analysis (for KCL) or mesh analysis for KVL, regardless of how complex they are. The only problem is that you wind up with lots of equations and may have to solve them as a system of simultaneous equations. Luckily, computers are really good at that, and circuit analysis software often uses one of these techniques to find answers.

This is actually too simple since we know V1 and V2 right out of the gate (5V for the battery and 0, because V2 is connected to ground). In addition, a human would know to calculate the equivalent of R2 and R3, but that might not be apparent in a more complex circuit, especially to a computer.

Of course, we know the values of everything on the right except Vx, so:

Note that the first line above is “backward” because I1 is flowing into node Vx and the others are flowing out; there are several ways you could elect to handle this. Now using KCL we know that: I1+I2+I3=0 You can replace all of the I’s with their equation:

If you look at the simulation, you will see that Vx is 1.09V. Now you can go back in the equations and get I1, I2, and I3, by just plugging in values. Of course, real problems get thornier and usually wind up with a system of equations you have to solve.

If you really want to pursue the higher math, you might enjoy the Khan Academy video on nodal analysis, below. Note that they handle the idea of negative current explicitly. If you want to use their math on our example, then I2 and I3 are explicitly negative and I1 is derived from 5-Vx instead of Vx-5. Then you wind up with -23Vx=-25 and get the same result in the end. That’s how math is.

The other way to do this sort of systematic analysis with KCL and KVL is mesh analysis. There you use superposition and simultaneous equations. But don’t worry — it isn’t as hard as it might sound. Rather than go into that, you can watch another Khan Academy video on the subject. Just dust off those algebra skills.

[Gustav Kirchhoff] was a German physicist who worked all this out in 1845, about 20 years after [Ohm] worked out his law. Actually, [Ohm] wasn’t first, he was just the first to talk about it. [Henry Cavendish] figured out Ohm’s law in 1781 using Leyden jars (big capacitors) and his own body as an ammeter. He’d complete the circuit with his body and judge the current flow by the amount of shock he received. Now that’s dedication. [Ohm] had a better experimental setup and — as far as we know — didn’t shock himself as a matter of course.

You might think that [Ohm] was well respected for his discovery, but that wasn’t the case. The establishment was very upset with his findings. One German yearbook of scientific critique labeled it “a web of naked fancies.” The German Minister of Education called it a “heresy.” It was in opposition to Barlow’s law (suggested in 1825 by [Peter Barlow]) which said that current was related to the diameter of the wire and the length of it.

Actually, [Barlow] wasn’t totally wrong. He used a constant voltage and did not understand (as [Ohm] did) that the voltage source had an internal resistance. [Ohm], in fact, switched from batteries to thermocouples because at the time they had a more stable output and predictable low internal resistance.

It is hard to imagine today, but there was a lot of experimentation and law writing back then — not all of it correct, obviously. Often the person we associate with the work wasn’t really the first, just the one that published. Another example is the Wheatstone bridge. [Sir Charles Wheatstone] made it famous, but it was actually the brainchild of [Samuel Christie].

For some reason, everyone knows Ohm’s law, but you don’t hear much about poor old [Gustav]. If you take an electrical engineering class, these laws are among the first things you learn. You might not use it every day, especially in this day of computer simulations. However, understanding analysis like this can help you develop an intuitive understanding of electronics.

By the way, the simulations in this post are using the Falstad simulator we’ve covered before. While it is common to use a simulator to just give you answers, it is also useful to let it check your work. The equations above, for example, would be easy to mix up signs or make another mistake. If the answer doesn’t match the simulator, you probably made a mistake. Sure, you can just read the value off the simulator, but that doesn’t let you develop the intuition that working through the math will.