While batteries are cheap and readily obtainable today, sometimes it’s still fun to mess around with their less-common manifestations. Experimenting with a few configurations, Hackaday.io user [will.stevens] has assembled an aluminium-air battery and combined it with a joule thief to light an LED.

To build the air battery, soak an activated charcoal puck — from a water filter, for example — in salt-saturated water while you cut the base off an aluminium can. A circle of tissue paper — also saturated with the salt water — is pressed between the bare charcoal disk and the can, taking care not to rip the paper, and topped off with a penny and a bit of wire. Once clamped together, the reaction is able to power an LED via a simple joule thief. 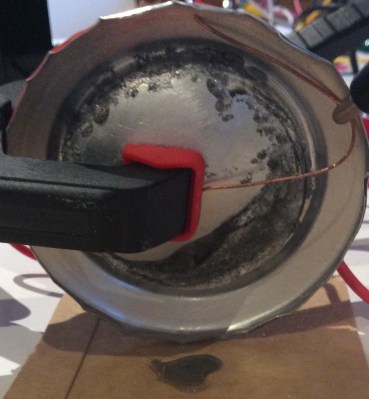 The cell averages an output of five milliwatts — at approximately 10% efficiently — which decreases as the salty water is used in the reaction and just plain dries up. Watering the battery daily — there’s an oddity — maintains the reaction and after a week you can see how much of the can has eroded  in the process.

You can also use one light source to power other lights with joule thieves, or even your clocks!

36 thoughts on “Stealing Joules From An Aluminium-Air Battery”