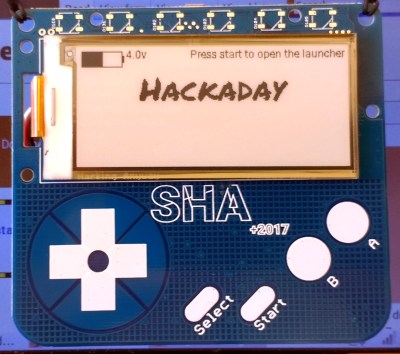 The badge has become one of the defining features of a modern hacker camp, a wearable electronic device that serves as both event computer and platform for some mild software and hardware hacking. Some events have had astoundingly sophisticated badges while others are more simple affairs, and the phenomenon has even spawned an ecosystem of unofficial badges which have nothing to do with the event in question.

The SHACamp 2017 badge is the latest to come the way of a Hackaday writer, and certainly contains enough to be taken as representative of the state of hacker camp badges in 2017. It doesn’t have a star turn like CCCCamp 2015’s software defined radio, instead it’s an extremely handy little computer in its own right.

The badge itself is a blue PCB roughly 95mm by 85mm in size, with a front panel dominated by a 296×128 pixel e-ink display and a set of capacitive touch buttons in a layout reminiscent of a Game Boy. At the top of the front panel are spaces for a set of Neopixel LEDs that the badge owner must solder themselves. 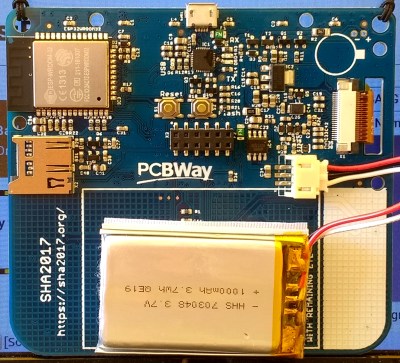 On the rear of the PCB is the badge circuitry and a 1000mAh lithium-polymer cell. There are surprisingly few integrated circuits, as the “brains” of the device comes via an ESP32 in a postage-stamp Wi-Fi module. The rest of the components are dedicated to the Silicon Labs CP2102 USB to serial interface, power regulation and battery charging, and the Freescale MPR121 touch sensor and GPIO expander chip. Aside from the USB interface there is a microSD card socket and an expansion socket for so-called “scarves”, or add-on boards. A further component that must be soldered by the user on this side is a vibrator unit. As of the end of the camp, the only scarf board created was a bare prototyping board.

As a camp attendee though this describes only the first impressions as a customer. No badge like this is a mass-produced piece of consumer electronics, instead each one is a custom design for that particular event. Behind the assembled badge we attendees received upon check-in lies many months of development and manufacturing steps from a team of volunteers, and it was this that the badge team supremos [Sebastius] and [Kartoffel] explained as we took a break in the Dutch sunshine outside the badge hacking tent. Our story then becomes less of a description of the badge, and more a fascinating exploration of the manufacture of a medium volume electronic assembly from scratch.

How To Make Four Thousand Badges Without Losing Your Hair

The genesis of this particular badge came two years ago after CCCCamp 2015, but solidified into something approaching the final production with some heavy influence from the functionality of EMF 2016’s Tilda Mkπ badge. It might seem obvious to list the desirable features of a camp badge, but it needed to display the owner’s name or handle, be easy to hack, provide access to event information, and most importantly of all, be working for its users from the start of proceedings. A secondary requirement was that the badge be readable in intense sunlight, as previous badges had been somewhat disappointing in that respect. Networking was originally to have been provided via Bluetooth hotspots, but it was later decided to use WiFi instead due to concerns over excessive use of 2.4GHz spectrum at the event. And finally the success of the EMF badge pointed the way to a MicroPython software environment with an associated library of apps.

Through the final months of 2016 and into 2017 then the first badge prototypes came together. The choice was made to use the then very new Espressif ESP32 microcontroller with its built-in WiFi, and to use an e-ink display rather than LCD or OLED. The design moved through a couple of early prototypes with the choice of the other chips made, and a pre manufacturing test production run that revealed some issues with their choice of USB connector that featured plastic protrusions for which there was no hole in the board. At this point [Sebastius] paused to hammer the point home that the advice he’d received from EMF’s [Jonty] to do a pre manufacturing test was the best thing they could have done, because without it none of us would have received a badge.

With a minor headache of their chosen touch control chip going end-of-life and thus shooting up in price, they weren’t done with those USB sockets. The replacement for their socket with the plastic protrusions turned out to overlap the edge of the board enough to touch the next panelised board during pick-and-place, and PCBWay, their manufacturer and one of their sponsors, pulled off some heroic mass reworking to deliver the goods. All seemed well, and the boards were manufactured and despatched from China to Europe.

When the completed boards arrived, they worked perfectly. Or at least, they seemed to. It soon became apparent that for about half the boards though there was an unexpected problem in that a switch from USB to battery power would reset the ESP32. This was eventually traced to the Silicon Labs USB to serial chip, and a fix had to be concocted.

The Silicon Labs part had been chosen due to ease of software drivers across all platforms compared to familiar alternatives such as the FTDI chip. Silicon Labs themselves had provided some sponsorship in the form of a significant number of the chips, but that had not been sufficient for the whole production run. The remainder had to be sourced in China, and as some of you are probably guessing at this point, the chips from China turned out to be fakes.

Even then, they weren’t bad fakes, they performed as you’d expect the original to, but their designer had made a crucial omission in leaving out a protection diode on the USB lines. The resulting spike on disconnection was thus enough to reset the ESP32, spelling potential disaster for the project. The fix proved to be both simple and hellishly difficult at the same time, a cut track and a piece of extremely fiddly soldering of a tiny SMD resistor, for which a heroic effort was made by a team of volunteer solderers. The fix can be seen on the reverse of the affected boards, and firmware has a bit of code to identify the fake chips and display the chip type through a pair of letters in the corner of the splash screen for easy identification.

All this design, sourcing, and reworking must have been a Herculean effort, and those of us who attended the camp should all be extremely grateful to the team for delivering us a badge that worked from the start. Some of us noticed the reworked resistor immediately on receipt of the badge, but without any idea of the scale of the work behind it.

What About The Software?

The hardware is only half the story with any badge though, because it is upon the software that a badge makes it or fails. In this context the SHA badge follows the tried and tested route you’d expect of booting into a nickname screen, with a launcher for installed apps (in the badge’s parlance, “eggs”) at the press of a button.  There is an app library (The Hatchery), and as this is a hacker camp badge the user is encouraged to write their own apps in MicroPython. The camp attendees did not disappoint in this respect, with many apps pushing the capabilities of the badge to its limit.

But this is a hacker camp, and despite our generally not being too enthusiastic about negative connotations surrounding the word “Hacker”, of course people are going to do mildly naughty things with the badge. There was ransomware, for instance, and viruses that would brick the badge of anyone unwary enough to install them. The write-up from the creator of the first SHA badge ransomware is a fascinating read in its own right. Then there was the badge reflashing station, a laptop in the badge hacking tent that people whose badges had problems could visit to refresh their firmware. This was a common occurrence without viruses or ransomware, even the most well-behaved of apps sometimes end up with crash cycles. This reflashing station was thus a significant target, and sure enough, someone managed to compromise it and use it to distribute a mildly malicious firmware. It is a mark of the nature of our community that both these exploits were embraced and applauded by the badge team, they’re part of our culture.

As an end user of the badge, what was my impression? It’s typical of such badges in that the software is rough around the edges and it’s not always the most stable of experiences, but this one is better than many others. The Hackaday badge required several trips to be reflashed after crash loops rendered it unusable, and there were plenty of apps that either don’t work or made the badge lock up. But this is par for the course with hacker camp badges, and with each successive firmware update the experience became smoother. The touch buttons would sometimes trigger unexpectedly particularly when the badge was being worn rather than held, so I ran the nickname app to display “Hackaday” on the e-ink screen, then disconnected the battery to make a static badge when I wasn’t using it. Otherwise, my display fixing glue succumbed to the heat (as it did with many users), so I got a piece of double sided tape from the badge bar to fix it.

Development wise, apps for the badge can be easily written in MicroPython. It’s time to shamefacedly admit that while I did some desultory hacking at it I created nothing worthy of the app library. It is however worth looking at for anyone who has a SHA badge, because of all the camp badges I think this one has least chance of being left on the shelf. We’re used to badges with all sorts of amazing capabilities, but until now we’ve not had one like this with an e-ink screen. This is a badge whose extended battery life and persistent screen will give it a place in all sorts of monitoring and information apps long after the memory of SHA 2017 has faded.

In conclusion then, what’s the verdict on the SHA 2017 badge? The e-ink screen and the ESP32 processor are a departure from the established trend with hacker camp badges, and when combined with a MicroPython environment inspired by the EMF 2016 badge it makes for a very practical badge platform indeed. The design is entirely open source, so it is entirely likely that given the ready availability of ESP32 modules we’ll see more than a hint of its DNA making an appearance in future badges. The SHA badge team have made a badge to be proud of here, and if other camps build upon their work then they will do so upon a solid base.

Postscript: The badge team at SHA2017 had a logo all of their own, featuring a pair of cartoon animals. For the curious among us who do not hail from the Netherlands, they are a SHA-themed parody of the popular Dutch children’s characters, the two friendly dogs [Woezel en Pip] (Google Translate link). Since the stickers seemed to be everywhere during the event, it seemed appropriate to clear that up.