Arguably one of most revered historical inventors we have is Lu Ban (鲁班). Lu Ban was an ancient Chinese carpenter, engineer, and inventor. He is revered as the Chinese god of builders and contractors (and in my opinion by extension Hardware Hackers). The inventions credited to him are probably at least somewhat apocryphal, but certainly not beyond reason. There are detailed accounts of a kite that could stay aloft for three days, a large variety of novel siege engines, a horseless carriage powered either by wind or some form of stored energy, and improvements to standard carpenters tools. As an interesting side note, Lu Ban’s wife is credited with the invention of the umbrella.

Although Lu Ban is not very important historically, there’s an idiom that references him that is useful for explaining far broader cultural issues to non-Chinese in a succinct way. Bān Mén Nòng Fǔ (班门弄斧) or “Don’t show your axe to Lu Ban”, our version of the English idiom “Don’t teach your grandmother to suck eggs“.

For Chinese, this means you think you know better than a professional, than experts. It’s the act of seeing something and saying “why don’t they do this instead?”. Traditionally, this is viewed as extremely arrogant and certainly not something to be encouraged in children or anyone else. 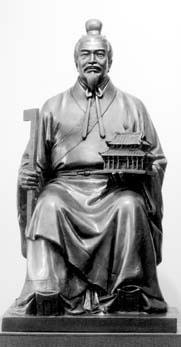 It’s important to state that Lu Ban’s role in Chinese culture is very minor at best, and obviously being a deity he does not directly correspond to say Edison (If you’d showed your axe to Edison he’d either have stolen the design or declared it a menace and tried to run you out of business so he could sell more saws). Again, I’m grossly oversimplifying both Chinese culture and history but you should not have to become an expert in either to get some PCBs made.

Simply put, in a strictly hierarchical society, proposing a solution missed by your superiors is at the very least perceived as arrogant. You’re just as likely to be penalized in some way for making whoever is responsible for the current solution lose face as you are to benefit in any way from proposing a better way.

Few Chinese companies promote engineering staff internally or even compensate them particularly well, so there’s little incentive to put an idea forward that may result in additional work and time away from their families. In short, what you get out of your Chinese partner has little relation to what they are capable of, and more closely indicates how they are incentivized (and they are, generally speaking, poorly incentivized). Since we are on the topic of idiom, this one rings true: “The nail that sticks out gets hammered down”. Unless you’re the boss of the company you rarely stand to profit from problem solving or creative thinking — and usually speaking up will be detrimental to you in some way.

As an overseas customer, knowing this may not get the job done faster, or better, or the way you want, but at the very least it will be taken less personally if there is a problem. In China we’re well aware that many of these habits are unhelpful, but when it comes to teaching problem solving and creative thinking we are trying to find a key to a very rusty, very old lock — but it’s a very nice lock that has been handed down for centuries so we don’t want to just throw it away and get another. There’s also a lot of evidence that it’s a pretty darn good lock if only we can get it working properly again. While that happens your patience is appreciated.

In the mean time, here’s a link to a printable 3D scan of Lu Ban as the patron saint of Hardware Hackers. He takes offerings of short pieces of printer filament, through-hole components, lead-free solder, and wire. Lu Ban helps those who help themselves, so provided you are a good craftsperson, work with care, and only supply him with high-quality offerings, he will ward off most printer jams, blue smoke, ESD (provided you ground yourself properly) and other common workbench mishaps.

Naomi “SexyCyborg” Wu is a coder, hardware and DIY enthusiast from Shenzhen, China. Members of both the Chinese and Expatriate Shenzhen Hardware community contributed to both the content, and the editing of this article. Join Naomi this Friday as she host a Hack Chat on Making in Shenzhen.