The other day I saw a plastic part that was so beautiful that I had to look twice to realize it hadn’t been cast — and no, it didn’t come out of a Stratysys or anything, just a 3D printer that probably cost $1,500. It struck me that someone who had paid an artisan to make a mold and cast that part might end up spending the same amount as that 3D printer. It also struck me that the little guys are starting to catch up with the big guys.

Sometimes it’s just a matter of getting a hold of the equipment. If you need a Bridgeport mill for your project, and you don’t have one, you have to pay for someone else to make the thing — no matter how simple. You’re paying for the operator’s education and expertise, as well as helping pay for the maintenance and support of the hardware and the shop it’s housed in.

I once worked in a packaging shop, and around 2004 we got in a prototype to use in developing the product box. This prototype was 3D printed and I was told it cost $12,000 to make. For the era it was mind blowing. The part itself was simplistic and few folks on Thingiverse circa 2017 would be impressed; the print quality was roughly on par with a Makerbot Cupcake. But because the company didn’t have a 3D printer, they had to pay someone who owned one a ton of cash to make the thing they wanted.

But access to high end tools has never been easier. Hackerspaces and tool libraries alone have revolutionized what it means to have access to those machines. There are four or five Bridgeports (or similar vertical mills) at my hackerspace and I believe they were all donated. For the cost of membership, plus the time to get trained in and checked out, you can mill that part for cheap. Repeat with above-average 3D printers, CNC mills, vinyl cutters, lasers. The space’s South Bend lathe (pictured) is another example of the stuff most people don’t have in their basement shops. This group ownership model may not necessarily grant you the same gear as the pros, but sometimes it’s pretty close.

Being too afraid to use an expensive and unfamiliar tool is a stumbling block for a lot of people. But I don’t need to tell you that hackerspaces are a motherlode of knowledge. Find those subject matter experts — the machine shop ninja, the person with the cleanest welds, the dude whose PLA prints always look great. When that falls short, we have a resource our ancestors did not: the Internet. YouTube alone has revolutionized getting trained in on tools. People go to trade school to learn how to operate big expensive machines, but you can learn what to do for free.

Just Send it Out 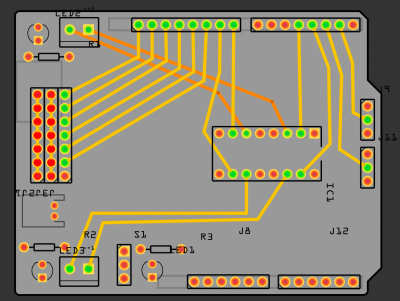 For pretty much the entire human existence we have been hoarding our knowledge. Trade guilds jealously preserved their knowledge, while masters took their best tricks to the grave. Only recently did the Open Source ethos develop, encouraging the sharing of knowledge and designs. Now we can download and use free equivalents to expensive professional software. I use Inkscape instead of Illustrator, Fritzing (pictured) instead of Eagle. Open Source software allows you to do your design work at home, for very little money. Are these packages as sophisticated and feature-rich as the pros? Definitely not, but usually they’re surprisingly close. Making vectors in Illustrator might involve some innovative tools like warps and filters, but those features don’t make my laser-cut enclosures fit together any better.

Even if you don’t have a hackerspace nearby, the story doesn’t end. So many companies out there will take your DXFs and STLs and use their equipment to make the part.

Where once we had to make PCBs with toner transfers and acid etches, now we can send stuff to OSH Park or Dirty or any of a passel of service providers. Fictiv offers urethane casting and CNC machining as well as 3D printing. Shapeways helps you print your design using a number of materials, and they even have an online store so you can make a little dough. Speaking of selling, sites like Tindie also give you the opportunity to sell the products you create.

I’m not sure how people invented things in the past but it was a far bigger deal than it is now. When people say “it’s never been easier” to make quality fabricated goods, its’ really true.

51 thoughts on “The Narrowing Gap Between Amateur And Professional Fabrication”