Let’s face it, in your workshop there are convenient tools, and there are quality tools, but so often they aren’t both. Think back to the tools you reach for first. Very often for me, speed and convenience win out. I don’t want to look too hard for that drill or saw, and want them to work as expected when I reach for them. At the same time, there are some tools that simply must be stored away, and can’t perch on my workbench forever or sit on a shelf.

It really is a balancing act sometimes. I don’t have a sure fire formula for when to break out the expensive tools, and what jobs are easy with the less expensive. I’ll lay out some of my most-often utilized tools in my arsenal, then I want to hear from you on your own faves. 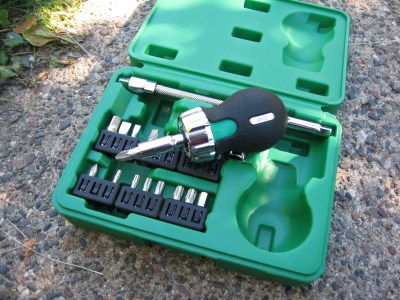 I put a lot of wear on my tools, and they usually stop looking pretty early on, so for me, spending a lot of money on a tool only makes sense if it brings with it greater functionality or durability. For instance, I have a crapass “Workforce” ratcheting screwdriver that does what I want it to. It has a decent ratcheting mechanism — none of the slipping you see in the cheapies. Prehaps even better, the Workforce has room for bits in the handle, giving me 7 to choose from without having to look for my bits.

I also have a gorgeous SuperKrome ratcheting screwdriver. It is black and green and chrome, and clicks like a Swiss watch when it ratchets. After owning it for around six years, I can tell you it’s been used around 10 times. Mostly it’s so seldom because the SK driver comes in a storage case and the bits are in the case alongside the tool, necessitating that the whole deal be stored in the case all the time. For me, if I have to break a tool out of a case, it’s just one more level of complexity to deal with.

Sometimes you just want to have a “beater” that you can use without worrying about. Some well-meaning relative gave me an expensive level as a gift. I’m talking hardwood with brass fittings and end-caps, weighing around 7 pounds. Its vials look like instruments from some 19th-century schooner. For how much that must have cost, I could have bought every size of cheap plastic level with enough money for a hot dog afterwards. It’s also terrible to store, due to the weight.

With that info in mind, here are the tools that used the most in my projects: 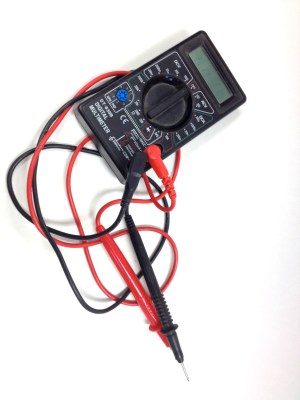 Cheap Meter: For basic stuff nothing is faster than the DT-830B that has been cloned all to hell. Did I mention it’s cheap? I have a couple of nicer meters, Extechs, but if I’m just testing a couple of things it’s so convenient to use this guy.

Cordless Drill: I use an 18v cordless drill quite a lot, for driving screws as well as drilling holes. It’s probably my #1 homeowner’s tool as well. If you’re in the market, I would definitely say to buy a quality name brand. In many senses they’re all the same, the top tier of Makita, DeWalt, Milwaukee, and so on. You just have to buy into an ecosystem so all your batteries will work together. I’ve used no-name cordless drills and they’re cheap pieces of junk waiting to fly apart (and be scavenged for drill motor hacks).

Multitool: Any time I forget my multitool I find a reason why I should have had it on me. Everyone has their own favorite; I’ve been using a SOG No. 61 forever and have few complaints.

Cordless Dremel: This is one of the few cased tools I use on a frequent basis. It’s fairly tough, with a sturdy plastic and steel frame that helps absorb a lot of the tool’s vibrations. Cordless means I can use it much more readily than its corded cousins, bring it to play in all sorts of situations. I haven’t found the best way to store bits beyond in the case.

Laser Cutter: My favorite tool; it usually just does what I expect. I use the hackerspace’s laser, and I’m finally fine-tuning my processes to the point where I don’t ruin projects as often as I used to. Limiting myself to just a couple of common materials, I know just what settings to use to output quickly and surely.

Digital Caliper. I have one of those $15 cheapies that works perfectly fine, but is very light and flimsy. I’m on the lookout for one that I can leave out of the case without worrying about it. For the money it’s a fantastic tool — it just weighs next to nothing. 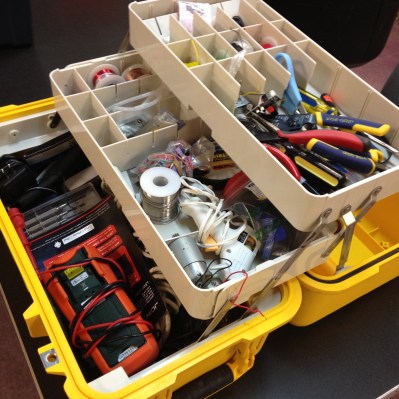 Hot Glue Gun: Anyone who pays a lot of money for their glue gun better be getting WiFi and padded seats with it, because even a midrange $10 model will give quality work for years. One more expensive version I’d like to try is a cordless electric glue gun (like a DeWalt), but only if I was working on a big project.

Hex Wrench: I have a set of Eklind hex wrenches that work brilliantly for my needs. I spent literally years fumbling around with other hex drivers, searching around for the right hex size, swapping in vaguely hexlike security bits when I couldn’t find the right one. Once I had an opportunity to try one of these guys, I never looked back. Eklinds are incredibly simple, with one wrench per size, and with imperial and Metric sizes available. They also have really long necks, allowing you to tighten socket-headed bolts in hard-to-reach places. I use these guys for robots and other projects with socket-head bolts.

Automatic Wire Strippers: I really like these classic automatic wire strippers that over the years have been cloned repeatedly and no longer are sold under any recognizable brand name. I have some different sets of wire strippers that are intrinsically better constructed and more precise, but this set is faster and easier to use.

Measuring Tape: The same as with levels, a large number of cheap tapes is better than one amazing one, unless it does something really cool like cleaning your soldering iron’s sponge. The convenience factor alone makes it worth getting 10 cheapies since, let’s be realistic, you’re not getting any added value from the fancy pants tape.

Enough about my tools. Leave a comment! I want to hear from you about your favorites. What works for you and why?

173 thoughts on “Ask Hackaday: What Tools Do You Reach For First?”