Monday, the Day I was Annoyed 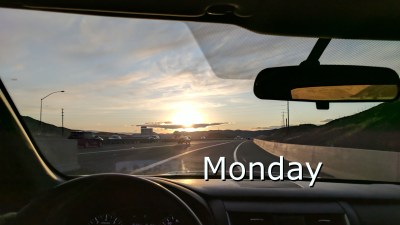 The first Monday, I was annoyed by the sun hovering over the road. To and from work, I squinted and used the visor as best I could, but it was a losing battle. The visor made it difficult to see cars in my lane even when the sun was off to one side.

We have all been here, metaphorically. We encounter a problem and at first, it is just a thing that is. Our brains register this as a new event and file it under something which annoys us.

Tuesday, the Day I Made the Easy Choice

On Tuesday, I bought sunglasses, 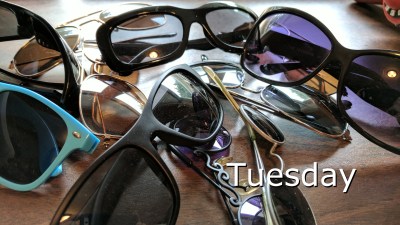 but they were not enough. When the sun was right on the horizon I could not lower the visor far enough and sunglasses did not help while staring directly into that distant nuclear reactor.

At this point, regular problem-solving skills start to kick in. The standard solutions, like sunglasses, are tried and maybe we get a little upset that things are not going our way. Our brains start to see a pattern after four commutes full of looking at a burning ball of hydrogen.

Wednesday, the Day I Did Something 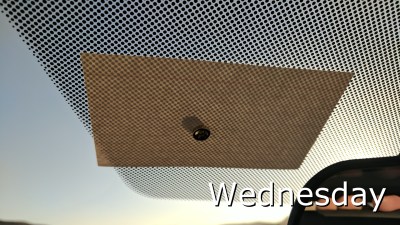 I diverged from the path of a non-hacker. The non-hackers would go on to complain about the layout of the roads. They would whine about how the roads should not run east-west and how their tax dollars were paying for roads that weren’t usable during rush hour. They would spend all their energies coming up with new ways to gripe.

Not me. I grabbed a couple of magnets from the refrigerator and a 3×5 note card before I left for work that morning. I put one magnet on the outside of my windshield and I placed the other magnet and the note card on the inside. The magnets held the note card in place and allowed me to position it anywhere on the windshield. Unfortunately, the flimsy note card did not do a good enough job of blocking light. That space orb was more powerful than thinly pressed dead trees.

Thursday, the Day I Did Something Better 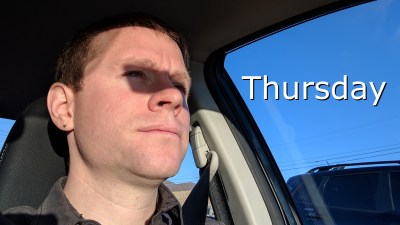 the design was revised. The magnets did a good job of moving across the windshield so I did not change them. The size of the note card seemed a bit larger than necessary and I needed something which could block light more effectively. A poker playing card was swapped into the design. Playing cards are designed to keep light from passing through so no one can read your card from the backside. A fortunate side-effect was that the low-friction finish on the card helped it shuttle around the windshield.

Most of my problems were solved except the low-friction finish allowed the magnet to slip off the card. The card was small enough to block the sun itself but light still spilled around it and I had to keep my head in exactly the right spot. It turns out that the size of the notecard was better than I had thought.

One of the caveats of engineering is that it leads to over-engineering. My mind started swimming with ways to use a third magnet or a carefully crafted shuttle that could hold the magnet while hugging the windshield.

Friday, the Day I Had Something New and Beautiful 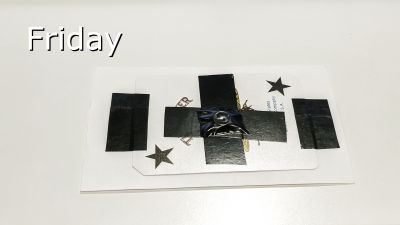 the final tweaks were made. Tape held the magnet to the playing card and more tape held the playing card to the notecard. I had no problems. As I drove, I simply positioned my magnet-card on the windshield every time the sun was shining in my face. When I did not need it, I moved it off to the side so the windshield wipers could not touch it. It is a functional product but maybe it will get some finish so it looks like it belongs in the car. Faux carbon fiber?

This investment of time was a risk, a time-gamble, but the rewards were worth it. Not every creation improves life more than it costs to make it, but being willing to look down that path, instead of just resorting to constant complaining, is what separates us. We are the ones who use our energy to make our lives better and share it with the world in the hope that someone else can benefit from our experience.

I should warn you that this was technically illegal in my state since there is a law about placing anything between the driver and the windshield. Fuzzy dice, parking permits, and radar detectors are all illegal to display while driving. Check your own area’s laws before performing this hack on your own. Another thing that separates us from them, is that I will tell you the law and what I did then let you decide what you do with that information.

Expanding Upon a Simple Idea

If you are like me, coming up with a simple and effective idea does not mean sitting back and just using it, it has to be improved beyond the initial hack. A good idea can become a great idea. A great idea can become an awesome idea. An awesome idea, with a product to back it up, can make money or make your life significantly better.

This is also a symptom of scope-creep but that is not what this article is addressing.

Hand-operated-window-mounted-solar-blocking-apparatus, HOWMSBA, did not receive any more modifications because it suited my needs but, while my brain was set to overdrive in invention-mode, more ideas popped up. Adjusting the card by hand worked fine for a proof-of-concept but anytime the car followed a curve in the road, it had to be adjusted. Connecting strings and motors seemed like a reasonable course of action. Four motors could be attached with suction cups at the corners of the windshield to pull the shuttle around. Adjusting pulleys could be powered with some stepper motors or simple continuous rotation servos with tensioner feedback.

An X-Y table would work but it would be hard to fit the curve of the windshield without obstructing the view significantly. It would also require a lot of tension to account for hysteresis. Whichever motor was selected, a little analog joystick, the $1 variety, could control the motors like a video game. Maybe the joystick could be mounted on the steering wheel and talk to a controller wirelessly. It could have a solar-powered battery pack too. Better yet, it could all be made automatic with a sun tracker mounted on a headrest which would automatically track the brightest point and position the card for me with a short offset to account for the mounting position.

That is what a mental dump looks like. Some of you readers undoubtedly had better ideas for ways to improve upon such a simple hack. Maybe one of those ideas will end up on Hackaday because we are not the people who just follow the recipes, we are the people who add our own ingredients.

114 thoughts on “What Makes A Hacker”