We cover a lot of the talks from the Congress, because they’re first-class and because you can play along at home, but the real soul of the Congress is people getting together, making something temporary and crazy, talking over their common plans, learning new things directly from one-another, and simply having fun. Here’s our chance to give you a little of the other side of the Congress. 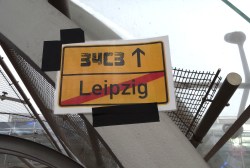 The CCC has outgrown two conference centers: Berlin, with a capacity around 4,000, and Hamburg, which was selling out in days and limited to 12,000 attendees. With the move to Leipzig, the floodgates were opened and 15,000 people attended. Viewed positively, everything that was previously cramped is now expansive. We watched in awe as around 4,000 people lined up, wrapping around the conference center nearly back to the entrance, and all got seats in the giant Halle Eins for “Methodisch inkorrekt“, a comedy-science show. In Hamburg, you only got into Minkorrekt if you camped out. In Lepizig, you could waltz in five minutes late — you couldn’t do that in Saal 1! And if the CCC had rented more chairs, the room could seat 11,000.

Almost as important as an empty seat in a good talk, there was tremendous excess networking capacity. While use peaked at 32 GB/s, there was capacity for 300-400 GB/s, due to generous upstream ISPs and a lot of hard work from the net ops. Even the homebrew GSM phone system, based on OsmocomBB, had excess capacity. In short, the infrastructure was sufficiently more than just sufficient. Hence the signs you see posted everywhere by the Network Operations Center since time immemorial: “Use More Bandwidth!”

Walking into the central glass hall early morning on Day 1, though, it felt more like an airport terminal than the maze-like hive of scum and villainy that was Hamburg. And this despite the welcoming sight of the Fairy Dust rocket inside the main hall. We talked to a number of people who were openly nostalgic for the last venue, and we sympathize. Hamburg was “gemütlich” — Leipzig is big.

Growing pains are naturally painful, but as the CCC family gets bigger, it simply needs more room. If the alternative is shutting out people who want to attend, a slightly sterile main hall is a fine tradeoff. And the big space looked awesome at night filled up with artificial fog and hosting laser projections.

Hackers All the Way Down

The coolest hall to hang out in doesn’t host talks, but is rather the Assemblies where all of the local hackerspaces and interest groups get together and bring their coolest toys. Want to sit down at a table full of Haskell fans and get a quick intro? Want to have someone look over your shoulder as you reflow your first PCB? Want to sit on a couch and chill out talking about blinking LEDs? There’s an Assembly for that.

As part of the general upsizing, the hall with the Assemblies grew by 20% this year, and that meant more room to walk around, but also more space for cool stuff. The Assemblies are also where you’ll find so many projects that have already been featured on Hackaday, and many more that should be. It’s great to see projectsn real life that I’ve personally written up, or even just given a skull to on Hackaday.io.

This 3D zoetrope by John Edmark was impressive. (Spoiler in the video.)

Crowd favorites included the pneumatic robot-dog-horse-with-gasmask driven by an Arduino. I couldn’t find its owner, but leaving it open to programming its various gaits was a very cool move. The Munich CCC crew put together a set of VR demos and programming workshops that were fully booked up. There was a station with six modular synthesizers brought in by Schneidersladen was fully occupied every time I walked by. There was a track set up for self-built (and many self-balancing) “vehicles” that was running almost all the time. The list goes on and on.

A Corner of the Assemblies

The kid’s zone was fantastic and seems to get bigger each year. There were tons of kids (of all ages) playing around with giant Lego-like bricks and DIY interactive games, or just riding cars down the ramp and playing the ball pit. The coolest addition this year? A game wall, about three meters wide by two meters tall that had glowing cups with conductive wires. When some two or three cups changed color, the kids had to create a circuit among them with their hands. At first, it started out easy enough that one kid could do it, then two needed to work together, holding hands to span larger and larger gaps. At the highest levels, it took a team of three or four to get the job done. Laughter, teamwork, and chaos ensued. I didn’t catch who made it. Anyone?

But by far the majority of hackers were sitting in their assemblies doing what they do best — hacking. Working on a team project with people scattered all over the country or the world, even with the best of computer-assisted communications, just isn’t the same as sitting down at the same table and banging out some code.

On a personal level, it was great to catch up with old friends, touch base again with newer friends, and meet some people in person who I’ve only known online. The central irony of the Congress is that it’s principally grounded in the idea that computer-mediated communications can help us work together. At the same time, it’s so much more pleasant to talk about scripting languages for schematic capture over a nice cup of tea.

We also had a last-minute Hackaday meetup, and a small group managed to connect up and we all talked about the important things in life: who we get to make our boards, what software we use for layout, and which talks were good. It was great to get some feedback on how Hackaday is doing, and it was nice to see you all! Between the meetup and other folks we talked to, there may be enough interest out there to launch a Hackaday assembly for next year. Stay tuned.