About two months ago I rode my bike to work like any other day, but on the way home a construction project seemed to have spontaneously started at one of the bridges that I pass over. Three lanes had merged into one which, for a federal highway, seemed like a poorly planned traffic pattern for a such a major construction project. As it happens, about an hour after I biked across this bridge that morning both outside sections of the bridge fell into the water. There was no other physical damage that seemed to explain why parts of a bridge on U.S. 1 would suddenly collapse.

The intriguing thing about this bridge collapse was that the outer retaining wall and about half of the sidewalk on both the northbound side and the southbound side had fallen into the water at the same time. This likely wasn’t caused by something like a boat impact, car accident, or an overweight truck. Indeed, Florida Department of Transportation (FDOT) investigated the incident and found that two post tension wires that held these sections of the bridge together had failed, making it unsafe for pedestrians and bicyclists but also for any boaters below.

This bridge, like most bridges in south Florida, was built in the post-war era when Florida had just started becoming a place to live thanks to the widespread adoption of air conditioners. In the 1950s, when this bridge was first built, the population of Palm Beach County was around 100,000. Now that number is around 1.5 million. The story is the same across most of the country, where it would have been impractical to have designed for such a huge population increase. Adding to the problem is the fact that maintenance budgets that are continually cut because it’s difficult to understand that something as permanent and strong as a bridge would need to be maintained. And even that assumes that infrastructure is being thought about at all; most people don’t think about infrastructure unless there’s a failure.

It’s hard to say for sure if more maintenance would have helped this bridge, anyway. It was inspected in 2015 and deemed “safe” although its rating of 75.8 out of 100 merited a “functionally obsolete” status. The fact that major portions of the bridge fell into the water would also indicate that “functionally obsolete” may have been a better indicator of this bridge’s condition than “safe”. 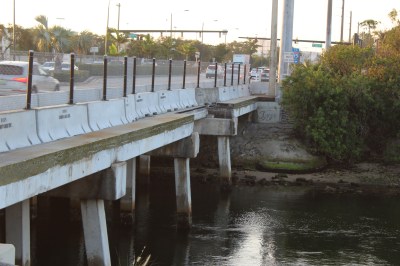 This bridge isn’t one of the largest pieces of infrastructure in the United States or a bridge on a major interstate. It’s even possible to drive around this bridge with only minor inconvenience. But that’s the real problem with the looming infrastructure crisis: It’s hard for major pieces of infrastructure to get funding for repairs or replacements, let alone minor pieces of infrastructure like this unassuming bridge in North Palm Beach, Florida. There are many more bridges over small rivers and creeks (and even other roads) than there are bridges over major rivers. The infrastructure that needs the most attention is often the most overlooked. And we’ve only been focusing on bridges in this article; roads, the power grid, agriculture, water and wastewater systems, and canals get almost universally negative ratings from the American Society of Civil Engineers (ASCE).

Infrastructure Failures Throughout the U.S.

The story in Florida isn’t an isolated one, either. The city of Charleston, South Carolina floods almost every time it rains during a high tide, yet the city has been exceptionally slow to improve pumping stations and drainage around the worst-affected areas. The problem is virtually the same as the one playing out in Florida: uncontrolled growth and an unwillingness to fund necessary upgrades and maintenance are combining to form a perfect storm. Charleston’s problem is compounded by the fact that it is built on a swamp, which doesn’t lend itself to easy solutions for drainage.

There are other relatively small infrastructure problems across the country as well. A bridge serving an interstate in Atlanta collapsed recently, although this seems to have been a complication of storing construction material underneath bridges rather than a direct failure of the bridge itself. There was also an 11-hour blackout at the busiest airport in the world, also coincidentally in Atlanta, due to inadequacies in the power grid. In places of the country that aren’t Atlanta, an 80-year-old water system in a small town in Oklahoma has been on the brink of failure, and a critical (and aging) energy hub in Oregon is at risk of major damage from earthquakes.

Again, keep in mind that these problems are relatively minor in the grand scheme of American infrastructure. None of the problems mentioned here have resulted in the kind of tragedy seen in the I-35 disaster in Minnesota, for example, but these kinds of problems are widespread, often unnoticed, and permeate virtually every aspect of daily life for the people who live anywhere in the country.

To further illustrate this point, at least for me, another bridge on my commute experienced a failure of sorts just this past week. The one drawbridge I pass over failed to close, and although they were able to close the bridge within the day this still impacted hundreds of drivers for one mechanical failure. The bridge was built at about the same time as the other bridge was, and if this bridge suffered a major and permanent failure it would be a major problem for everyone in the area. Also, if two out of the three bridges in a 13-mile stretch of road have had visible problems in the past five months, imagine how many other infrastructure problems are lurking under the surface, unnoticed by the civil engineers who have to solve these problems despite continual cuts to their maintenance budgets.

107 thoughts on “Local Infrastructure: The Devil Is In The Details”