The PocketSprite is the tiniest fully-functional Game Boy Color and Sega Master System emulator. Not only is it small enough to fit in your pocket, it’s small enough to lose in your pocket. It’s now available as a Crowd Supply campaign, and it’s everything you could ever want in a portable, WiFi-enabled, fully hackable video game console. It also plays Witcher 3. And probably Crysis, because of the meme.

This has been a year and a half in the making. The first hardware version of the PocketSprite was revealed at the 2016 Hackaday Superconference by hardware engineer extraordinaire [Sprite_TM]. As [Sprite] has a long list of incredibly impressive hardware hacks like installing Linux on a hard drive and building a Matrix of Tamagotchis, he always has to keep pushing deep into the hardware frontier.

In 2016, [Sprite] showed off the tiniest Game Boy ever, powered by the then brand-spankin’ new ESP32. This was released as Open Source, with the hope that a factory in China would take the files and start pumping out mini Game Boys for everyone to enjoy. Now, a year and a half later, it’s finally happened. In a collaboration with manufacturing wizard [Steve K], [Sprite] is the mastermind behind TeamPocket. The pocket-sized Game Boy-shaped emulator is now real. This is our hands-on review.

From a Watch to an Emulator 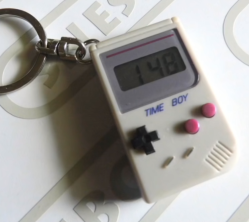 The PocketSprite is a childhood dream for [Sprite]. Way back in the day, [Sprite] came across a Game Boy-shaped object that fit on a keychain. This Time Boy astonished the young [Sprite], and he dreamed of having a Game Boy on his keychain that he could pull out and play Tetris or Kirby.

Unfortunately, the Time Boy was a disappointment. It was simply a digital clock that completely ripped off the trade dress of the original DMG Game Boy. A long time has passed since then — and we’re more than a decade past the former smallest Game Boy, the Game Boy Micro, so why can’t [Sprite] just take a powerful microcontroller, a small display, and mash up a tiny, keychain Game Boy? 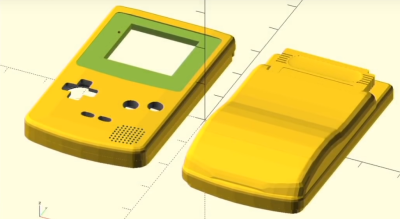 The PocketSprite was introduced to the world at the 2016 Hackaday Superconference and remains one of the most satisfying talks on hardware creation we’ve ever seen. [Sprite] started off with an ESP32 (as an ESP-WROOM-32 module), a 96×64 OLED display, and the bare minimum of components to turn this hardware into a functional console. The case is a work of art, modeled (in OpenSCAD!) as a minified Game Boy Color, the emulators are heavily optimized, and [Sprite] even tossed in a few nifty features like being able to play DOOM poorly and Witcher 3 surprisingly well. You can watch this legendary talk below.

The goal for [Sprite]’s Game Boy was always to make it Open Source. The hope beyond that is that a random factory in China would realize the demand for tiny Game Boys, make a few molds, buy thousands of ESP32s ([Sprite], by the way, works for Espressif, the manufacturer of the ESP32), and release these Game Boy Micro Pockets onto AliExpress and TaoBao. For some reason, this never happened, and because of Big N’s litigiousness and the fact that he directly copied the case of the Game Boy Color, he was a bit gun shy at doing a crowdfunding campaign by himself. In any event, building one of something is much, much easier than building tens of thousands of a thing.

However, over the last few months, [Sprite] has been working with ‘manufacturing guru’ [Steve K] to turn this one-off project into an actual project. The OpenSCAD Game Boy Color case is gone, replaced with a simpler, more rectangular and decided not Atomic Purple enclosure. The software has been optimized, and Game Gear emulation was added. [Sprite]’s Game Boy mini is now a product, so how does it stack up?

As Cool As A Tanooki in a Wind-Up Shoe 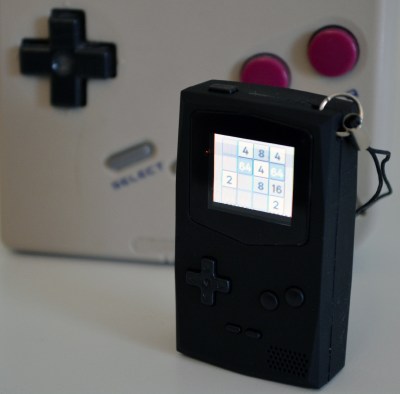 Now the PocketSprite is real, and as far as I can tell, the hardware is nearly identical. Inside, you’ll still find the same ESP32, a tiny speaker, tiny buttons, and what I’m betting is an H-bridge for the audio driver. It looks like there are some slight improvements over the first revision of hardware, but this is effectively the same tiny Game Boy presented by [Sprite] at the 2016 Hackaday Superconference.

The Crowd Supply campaign and the official PocketSprite page lays out the specs, and you are getting everything as advertised with this sales pitch. Of note is a link to the PocketSprite GitHub, which provides the sources for a modified SMSPlus (Game Gear, and Sega Master System) emulator, and the Gnuboy (Game Boy and Game Boy Color) emulator. Also included is an SDK for pulling off the incredible hack of playing Witcher 3 on an ESP32. [Sprite] did it with VNC, which doesn’t sound impressive until you realize this is also an Nvidia Shield you can put in your pocket.

This is the hardware we’ve been waiting for, and we can’t wait to see what the community does with it. Remember, this isn’t just an emulator: this is a fully-functional WiFi and Bluetooth-enabled microcontroller system running on a rechargeable battery with a ton of Flash and an SDK. It’s brilliant, and it is completely worth the wait.