A Small Speed Boost For The CPU, A Huge Leap For The LAN 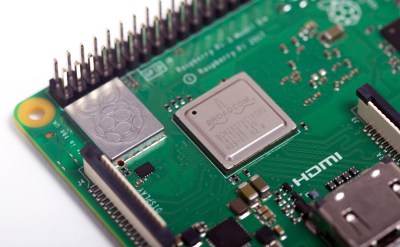 When the Raspberry Pi was first announced, it was heralded as a legitimate desktop computer, capable of everything from word processing to web browsing, all for less than $40. The first batch of Pis sold like hotcakes, but using this computer as a desktop replacement was a slightly frustrating experience. With the release of the Raspberry Pi 3 in 2016, this changed. The Pi was fast enough and the software was good enough that, yes, this was a capable computer suitable for light web work and even a few computationally expensive tasks. Add onboard wireless, and the Pi 3 Model B was a great computer.

The newest member of the Raspberry Pi family remains a great computer, but don’t expect a truly massive speedup from this upgrade. The processor is still the Broadcom BCM2837 found in the Raspberry Pi 3, a quad-core A53, 64-bit CPU. There is a slight upgrade over the Raspberry Pi 3; thanks to improved power integrity, thermal design, and possibly a metal can over the CPU, the Raspberry Pi 3 Model B+ now runs at 1.4 GHz, instead of the 1.2 GHz of its predecessor.

The most visually striking difference between the old Pi 3 and the Pi 3 Model B+ is the embossed metal shield over the RF guts of the board. This houses the new, dual-band 2.4 and 5GHz wireless LAN, and Bluetooth 4.2/BLE. The Pi 3 used a BCM43438, which only supported 2.4GHz WiFi, whereas the new wireless chipset is significantly more capable and able to work with 5GHz networks.

But that metal shield covering the new wireless chipset isn’t just for decoration. The Raspberry Pi 3 Model B+ comes with modular compliance certification. This allows the Pi 3 Model B to be used in products with significantly reduced compliance testing.

While these are welcome changes, this isn’t the biggest reveal for the Pi 3 Model B+. Before the introduction of wireless on the Pi 3, the Ethernet was severely constrained by the LAN9514 USB hub and Ethernet controller. This chip provided the four USB ports and Ethernet to the Pi’s SoC, but networking was limited to 100 Mbps in the best case, and somewhere around 80 Mbps in real-world usage.

So What’s In The Can?

Being the first Raspberry Pi featuring an RF shield, there is the obvious question of what’s under the can?. The bad news is, removing that RF shield will void any warranty, allow the Pi to spew RF everywhere, and there will be no hope of meeting compliance. The good news is that there are some really cool components under there.

The chip responsible for all the wireless functionality is a CYW43455, a Cypress and/or Broadcom part capable of 802.11ac with support for 2.4 and 5GHz WiFi, and Bluetooth 4.2. The Raspberry Pi 3 Model B — last year’s model — featured a BCM43438, that did not include support for 5GHz radios or Bluetooth 4.2.

It’s a welcome addition, but the real story here is the RF shield that helped secure this board’s modular compliance certification. Now you can use this board in a product and won’t have to pay for the expensive intentional radiator testing required of all new products featuring their own home-spun radios.

Although I wouldn’t necessarily call it a failing of the latest Pi, there is something you might want to watch out for. The addition of Power over Ethernet (with an add-on hat), may get in the way of other Pi hats.

This is also right where the ‘Run’ header was placed in the Pi 3 Model B, and I’m sure there are a few products out there that make mechanical use of this header designed for reset buttons. Is it terribly broken? No, but it will ruin somebody’s day eventually.

While it’s not a Raspberry Pi with SATA or PCIe or whatever people with unrealistic expectations are clamoring for, the Raspberry Pi 3 Model B+ is a capable and desirable upgrade for what is now the most popular computer on the planet for varying definitions of ‘computer’.