While nobody is exactly sure on the exact etymology of the term, Thomas Edison mentioned some of his inventions being riddled with “bugs” in a letter he wrote all the way back to 1878. In the context of computers, any loyal Hackaday reader should know Grace Hopper’s infamous account of a moth being caught in an early electromechanical computer’s relays. To this pantheon of troublesome insects, we would humbly summit the story of a Sonoff TH16 switch being destroyed by a lowly ant. 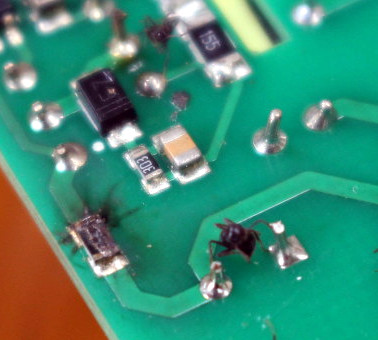 According to [CNX Software], the Sonoff TH16 had been working perfectly for a year and a half before the first signs of trouble. One day the switch wouldn’t respond to commands, and a power cycle didn’t seem to clear the issue. Upon opening up the device to see what had gone amiss, it was clearly apparent something had burned up. But upon closer inspection, it wasn’t a fault with the design or even a shoddy component. It was the product of an overly curious ant who got a lot more than he bargained for.

Consulting the wiring diagram of the Sonoff, it appears this poor ant had the terrible misfortune of touching the pins of a through hole capacitor on the opposite side of the board. Bridging this connection not only gave him a lethal jolt, but apparently caused enough current to surge through a nearby resistor that it went up in smoke.

Now, some might wonder (reasonably so) about the conditions in which this switch was operating. If bugs could climb into it, it’s not unreasonable to assume it wasn’t well protected from the elements. Perhaps damp conditions were to blame for the failure, and the image of the ant “riding the lighting” is nothing more than a coincidence. Maybe. But sometimes you just gotta believe.

Incidentally, if you’d like to learn more about the woman who helped secure “bugs” in the IT lexicon, here’s a good place to start.

Ed Note: If you think you’re having deja vu all over again, we did point to this story in the Sunday Links roundup, but the graphics are just so good we couldn’t resist running it in full.