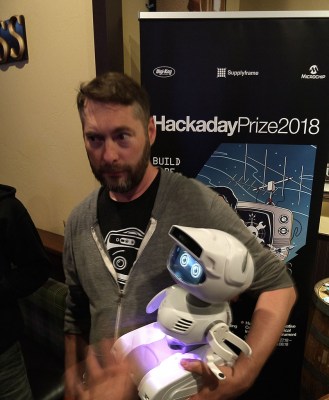 The team from Misty Robotics brought their namesake product to the meetup and carried Misty when there wasn’t enough room to let the robot run. Here [Ben Edwards] is answering questions about Misty’s capabilities. The team wants their product to appeal to a wide spectrum of budding roboticists: from beginners who need a gentle on-ramp to seasoned veterans interested in modifying Misty for their own needs.

Since those who would attend a Hackaday + Tindie meetup trend towards the latter, Misty arrived with a demonstration of hackability: a 3D-printed beer glass holder has replaced the standard left arm, fitting in with the meetup’s location. It was fun to see the robot’s personality as Misty looked around and occasionally reacted to being patted on top of the touch-sensitive head.

Longtime Hackaday.io participant Joshua Snyder brought his projects RGB LED matrix and Neopixel pocket watch, giving people who have only read about his projects an opportunity to play with them in person. The Neopixel pocket watch seen below is quite the stealthy transformer — when closed and inactive, it blends in with wardrobe of another era. But when active, it is very definitely a 21st century timepiece.The RGB LED matrix also shown was pressed into service as an impromptu bar arcade.

TinyCircuits made a great bar-top showpiece

Joshua Snyder with is LED Pocket Watch and RGB matrix

Some of the attendees had problem finding enough table space in a crowded bar to set up, but the crew of TinyCircuits had no such worry. They were able to put their entire product line on a little round bar table and still leave plenty of room for everyone’s beer. If you’ve only seen these creations in pictures, it’s hard to appreciate how tiny they actually are. It takes some hands-on time for the size to really sink in, and this table is always crowded with people clicking tiny buttons with their fingernails. 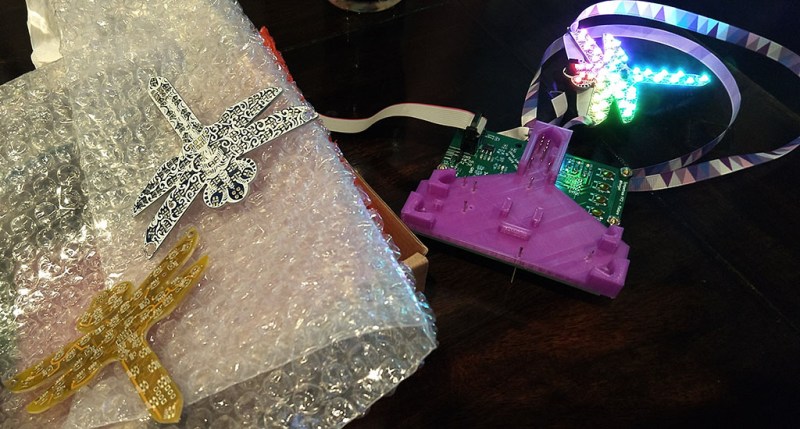 Hackaday’s own Kerry Scharfglass is local and brought his sympetrum boards to show during the evening. Based on Neal Stephenson’s book The Diamond Age, these badges will synchronize their colors when in the same room together. Kerry built version 2 of the badge for last year’s DEF CON but what is show here is the work-in-progress version 3. And we also got to see a bit of behind-the-scenes of building blinky LED badges as Kerry brought a development tool featuring 3D-printed jig holding pogo pins to interface with his v3 board.

We invited Hackaday Prize participants to bring their entries, and Michael Graham is among those who answered the call. His Mug-O-Matic is a demonstration piece for his linear actuator module, one of twenty winners of our Robotics Module challenge! Sadly we didn’t get a chance to see Mug-O-Matic in action as Michael’s beverage came in a small plastic cup instead of a suitable mug. But the cup was enough to fuel the main purpose of the night: chatting about hacks and hacking.

The further back you go into the room, the more crowded and louder it got, but the effort will be rewarded with projects plugged into power outlets on the back wall. A spectacular example was the Volumetric POV Display by Jamal Davis. His project has everything — custom LED circuit boards, wires to power them, motor to spin them, micro controller to orchestrate everything, all housed inside a 3D-printed enclosure. 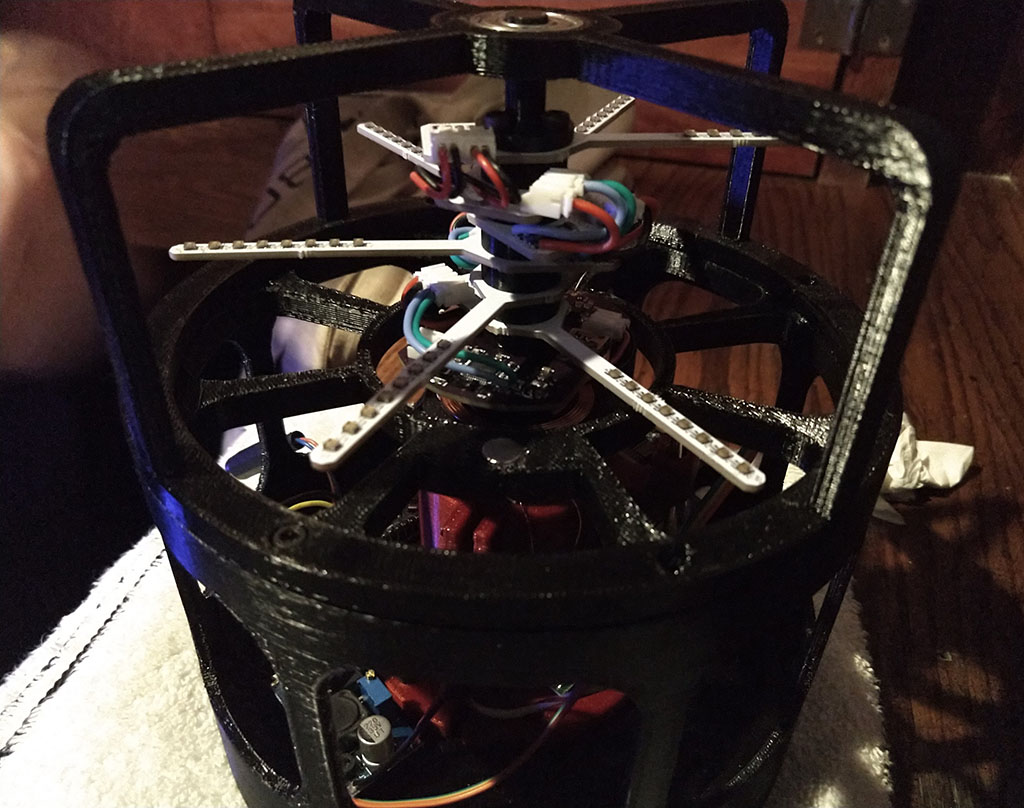 It was impressive enough to look at even before it was turned on. Once it started spinning, the light show stole all the attention.

The above are just a sample of creations lighting up tables at this year’s Hackaday x Tindie BAMF meetup. The projects get more amazing every year. Join us next year to see what wonderful creations show up!

5 thoughts on “After The Sun Set On San Mateo, LED Takes Over Hackaday’s BAMF Meetup”