There’s really nothing new to say on this topic. Yes, you could conceivably print a firearm on a 3D printer if you were really motivated. It might fire once or twice, or it might explode in your face. The age of clicking a button and pulling out a gun that is safe to fire and effective to use is still very very far in the future. As we all know, 3D printing is not to be feared.

Even the best 3D printing gurus aren’t able to print objects that will repeatedly contain a controlled explosion. A 3D printed gun is in nearly every way inferior to the one you could make by going to a gunsmith’s. On the other hand, there are remarkable, elaborate mechanisms and useful devices that are 3D printable. It’s unfortunate that it takes talk of a 3D printed gun for the general public to become aware of these incredible rapid prototyping tools, but it has happened and the best service we can do is help correct expectations of what the state of the art can accomplish. It’s much more interesting to talk about objects that are reasonable to 3D print.

Should You Be Able to Print a Latch for Your Dishwasher?

What’s really interesting to me about this case is the argument that these designs are free speech. If true, this means in the United States CAD designs should fall under protections afforded by the first amendment of the constitution. (If you’re looking for something to gnaw on in the comments, ditch the guns distraction and discuss that!). But because this is a settlement and not a ruling, the question of CAD as free speech wasn’t put to the test. 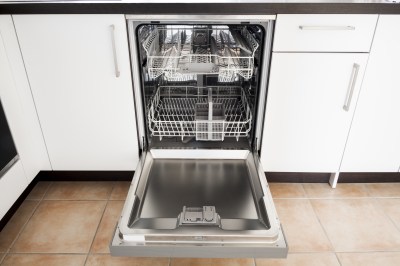 One of my go-tos when discussing 3D printing is to talk about my dishwasher since everyone either owns one or is already quite familiar with them. There are a lot of dishwashers, they are not standardized. When the plastic latch on your dishwasher breaks, what are your options? Call a repairman, have them come out and look at the problem, then order a part and pay for them to return a few weeks later to do the installation. What if that repairman had a 3D printer in their van and could fire it up while disassembling the appliance?

Whoa, whoa, whoa, you can’t just print that part. The company that manufactured the dishwasher surely must have an IP claim to it, right? I think that has already been solved, as aftermarket parts are widely available. So why not? Indeed, why not have the company supply the designs as a service to their loyal customers?

This saves so much time and expense. You don’t need to warehouse the parts, ship them great distances, or dispose of unused stock long after the life of the original units. You don’t have to wait for shipping on the repair or make repeat service calls. This is the most mundane example of 3D printing but an easy way to see the direct benefit. Dishwasher latches are simple plastic parts and that’s what 3D printing is best at right now.

Whether it’s a dishwasher latch, or something else, are we free to share design files we’ve created for physical objects? Of course we are. So how did this end up in the courts?

This is a topic where it is almost impossible to stay out of ideological quicksand. But as I mentioned above, the important portion of this settlement is actually about CAD files… not 3D printing or guns at all.

Ars Technica has made the settlement document available (via their coverage). In this case it was  ITAR that was put to the test. ITAR restricts the export of defense-related technologies from the US. The settlement names 22 CRF 125.4 (13) as the exemption that covers the plans — “Technical data approved for public release (i.e., unlimited distribution) by the cognizant U.S. Government department or agency…”. Because this is an exemption requiring approval, it does not leave the door open for all future designs to escape the watchful eye of ITAR. But part of the settlement includes a commitment from the government to pursue rules changes that would exempt technical data like these CAD files from ITAR restrictions. Exactly what that means will remain a mystery until specific changes are actually proposed.

Still not satisfied? Okay, I’d like to assuage the frequent concerns we’ve heard over years of covering 3D printed guns. These include the availability of guns to those who should not have them, and the appearance of untraceable and undetectable firearms. These are both valid concerns. But likely they are concerns on a very small scale right now because of the sheer difficulty of producing one, much less multiple high-quality units using current printer technology. 3D printing is nearly the worst way to acquire a gun. As for the untraceable and undetectable — this is a more general problem that there are people who seek out these particular traits. The thing to remember is that untraceable and undetectable guns already exist and are not new with the advent of 3D printing.

Be Proud and Be an Ambassador

Our motto? Print low-poly Pokemon, not guns. Or heck, print something useful like a project enclosure or a tourbillon.

We are ambassadors of 3D printing. This is an amazing tool available to anyone who wants to try out their creativity and make something that previously only existed as a bit of extruded plastic filament. That’s really cool! Show off the best benefits of this field, better inform the public about it, and we have nothing to fear when news bubbles up involving 3D printing.