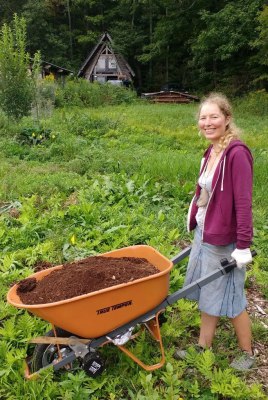 The project is a bit more sophisticated than sticking a motor on the wheel, though: [Karl] details how he chose the wheelbarrow to motorize, going with a single-wheel wheelbarrow than the two- or -four-wheel models he initially considered, because it is easier to navigate. He drilled holes in the front wheel and added a chain wheel, mounted at several points to stop the cheap metal wheel the barrow came with from warping. This chain wheel is driven by a $350 Luna Cyclone Mid Drive motor driven from an Ego battery mounted behind the carrier. He admits this motor is rather more than a wheelbarrow really needs, saying that it “provides more power than you’re probably ever going to need, even when wheeling 500lbs+ up a very steep incline…. at full throttle still goes faster than I can run.” Perhaps the next phase could include a remote control and robotic arm so it can load (and unload) itself.