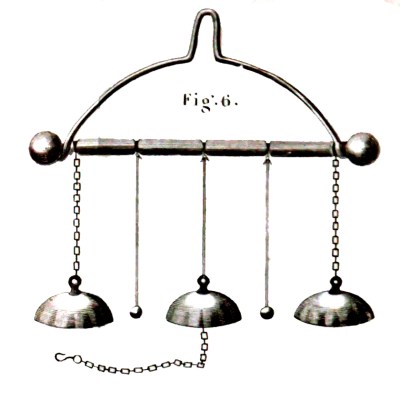 The idea is simple: there are three brass bells in a row. The end two hang from a metal chain and the middle one hangs on something non-conductive. In between each pair of bells is a metal “clapper” hanging from a non-conductive thread. A Leyden jar connects between the metal stand and the central bell. This causes the clappers to be attracted to either the center bell or the edge bells. When it strikes the bell it picks up its charge which causes it to be repelled and it transfers its charge to the opposite bell which then repels it again. This whole process repeats as long as there is a fresh charge supplied.

The Oxford bells are a little different. They use a pair of dry piles — no one is exactly sure about their construction, but they may be Zamboni piles — a battery dating back to 1812 invented by a priest who appears to have had nothing to do with ice rinks. In fact, [Zamboni] used the same principle to develop an electrostatic clock where the clapper was effectively a metronome-like pendulum. If you’ve ever made a battery with pennies, tin foil, and paper towels soaked in vinegar, the idea is similar. The Zamboni uses a dry electrolyte.

Some have speculated that the Oxford bells are a perpetual motion machine, but — of course — it isn’t. The batteries will eventually dry out and the bells will go silent. Actually, they are silent today because you can’t hear their gentle ring behind two sheets of protective glass. Still, it is enough to hold the Guinness World Record for durable battery providing tintinnabulation (and, yeah, we had to look that up).