2018 is almost over, and we have another year in the dataset: an improbable number of celebrities died in 2016. The stock market is down, and everyone thinks a crash is coming. Journalists are being killed around the world. Fidget spinners aren’t cool anymore. Fortnite. Trade wars.

But not everything is terrible: Makerbot released a new printer and oddly no one complained. It was just accepted that it was an overpriced pile of suck. Elon Musk is having a great year, press and Joe Rogan notwithstanding, by launching a record number of rockets and shipping a record number of cars, and he built a subway that we’re not calling a subway. FPGA development is getting easier with new platforms and new boards. There is a vast untapped resource in 18650 cells just sitting on sidewalks in the form of scooters, and I’m going to keep mentioning this until someone actually builds a power wall out of scooters.

When it comes to small, portable Linux devices, there hasn’t been a better year than 2016. That’s the year that brought us dozens of new, fun boards that would certainly be the future of embedded computing. Take a look at the Pine64, the first 64-bit Linux-based single board computer. OrangePi did something that can be described as ‘cattywampus’. Even Intel got in the game, but they forgot to write documentation.

How about 2018? Well, Raspberry Pi released the Pi 3 Model A+, but that’s really just a Pi 3 Model B with fewer parts. Other than that, there’s not much. 2018 did not see dozens of single board computers based on smartphone SOCs. C.H.I.P. died, which is great for anyone who has to type ‘C.H.I.P.’ frequently, less so for people who were counting on Open Linux modules that had complete register documentation.

What caused the development of tiny Linux SBCs to stall? The reasons for this range from companies waiting for next-generation SOCs to come out (doubtful), to the fact that people simply aren’t buying them. Could it be that the general public is realizing that a cheap ARM board with zero software support is a false economy? I highly doubt this is the case, but then again I have a very low opinion of people.

RISC-V has been on the tip of our tongue for a few years now, and already we have really fast microcontrollers based on this architecture (that are also really expensive, but that’s beside the point). 2019 is shaping up to be one of the biggest years yet for RISC-V, and with that popularity comes decreasing prices. SiFive is releasing a multicore processor that runs Linux. There are smaller, lower-power RISC-V cores and completely random online shops on TaoBao are selling RISC-V cores.

The RISC-V proposition has always been a weird one. Yes, it’s a big-O Open architecture for everything from microcontrollers to Systems on a Chip. But it’s just a design. You need fab houses cranking out silicon wafers with RISC-V chips on them. That’s expensive at first, but then the price starts to drop. It looks like 2019 is shaping up to be the year that everyone can get their hands on a RISC-V chip.

The markets are down 7% this year. Bitcoin is down slightly more.

At this time last year, a single Bitcoin was worth sixteen thousand dollars, USD. Now, it’s worth less than a quarter of that. Unlike earlier Bitcoin bubbles, the price has not corrected — this is a year-long bubble bursting. Those people who thought Bitcoin would be worth $500,000 USD by 2020 have some debts to pay off. 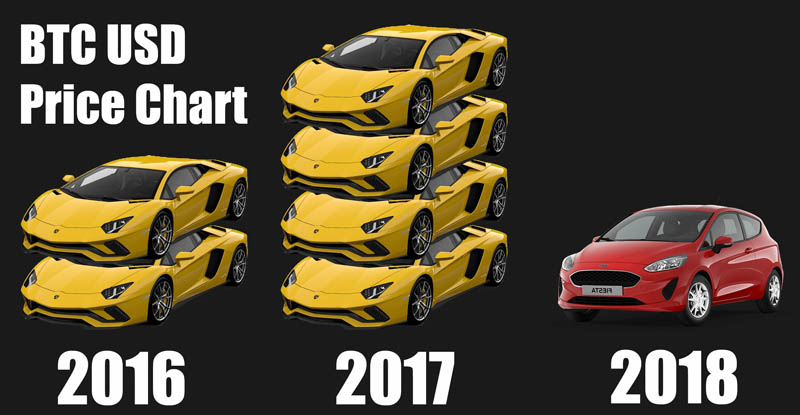 The Bitcoin price crash is having a few unintended consequences. Power companies in western Washington aren’t freaking out anymore because miners are turning their machines off. Bitmain, one of the largest suppliers of ASIC miners, is having trouble with TSMC. It’s almost unprofitable for anyone to mine Bitcoin, and nobody knows what will happen to the network when that happens. But there’s an upside: graphics cards are more affordable. A completely acceptable 1070Ti (perfect for Fortnite, the game of the year for 2018) has fallen from $650 to $450. We’re seeing fewer people pitching ‘blockchain solutions’ in the Hackaday tipline.

The lesson from the Bitcoin crash? If you ever get a time machine, buy some Bitcoin in 2009. Sell them in December, 2017. Put twenty Lamborghinis in your Lamborghini account. If you’re building a PC soon, put that money you’re saving on a graphics card into a nice power supply.

This is a year that rocked Facebook. It started years ago when a Facebook app developer (no, not someone working for Facebook, this is a third party who wrote a Facebook ‘app’) gathered information on about 200,000 of his app’s users and eighty seven million of those app user’s friends. This data was sold to Cambridge Analytica, where the data was used in the presidential campaigns of Ted Cruz and Donald Trump, and in the UK’s Brexit referendum.

What will 2019 hold for Facebook? I forsee the ‘un-cooling’ of Facebook. In 2006, you were cool if you had a Facebook. You could only have a Facebook if you had a college email address. It was an exclusive club. 2019 will be the year that you’re only cool if you don’t have a Facebook account. We’re looking at ‘I deleted my Facebook’ hipsterism. Everyone else is going to lose, though, because I deleted mine in 2009. I’m way cooler than you. 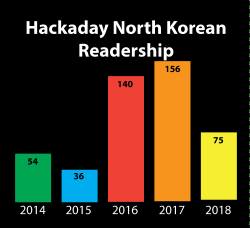 This is becoming a thing because I’ve been doing it for five years. Hackaday’s North Korea readership plunged 50% this year. One person probably switched VPNs.

But on the whole, things are looking up for Hackaday. This year we published the most articles of any previous year. 2018 saw another year of the Hackaday Prize, where we awarded $250,000 to the most amazing projects on the Internet. The community is growing, and Hackaday is going gangbusters. We’ve gone to more events than we can count this year.

This has been a strange year. The market is falling, which means everyone thinks there’s going to be a crash, which probably means there won’t be. But things are looking up, and we’re looking forward to another year of hacks in 2019.