There’s a new soap opera that I can’t stop watching. Actually, I wish I could change the channel but this is unfortunately happening in real life. It’s likely the ups and downs of drone sightings would be too far fetched for fiction anyway.

If you aren’t British, maybe you will know a little of our culture through the medium of television. We don’t all live in stately homes like Downton Abbey of course, instead we’re closer to the sometimes comedic sets, bad lighting, and ridiculously complicated lives of the residents of Coronation Street or of Albert Square in Eastenders that you may have flashed past late at night on a high-number channel.

Our new comedy soap lacks the regional accents of Emmerdale or Hollyoaks, but has no less of the farce about it. Here at Hackaday we’ve brought you news of the UK’s peculiar habit of bad reporting and shoddy investigation of questionable drone sightings several times over the last year or two. Most recently we covered a series of events before Christmas that closed Gatwick, London’s second airport for several days over what turned out to be nothing of substance.

Unfortunately it didn’t end there. We’re back once more to catch up with the latest events down on the tarmac, and come away with a fresh set of reasonable questions unanswered by the popular coverage of the matter.

Another Day, Another Police Helicopter

The Gatwick airport was closed over more than a day based on eyewitness reported sightings of a drone — which we take to mean a small unmanned aircraft. After much investigation (and the arrest and release of suspects) the embarrassing admission that it might all have been about nothing came just before Christmas, giving everyone a few weeks to forget about it in a haze of seasonal gluttony and bad jumpers. But the second week of January brought another story. This time it was London’s main airport, Heathrow, and yet again at dusk on a winter’s evening a drone spotting was reported. The airport was closed, and in contrast to Gatwick there were multiple reports of sightings. Surely with lights spotted over the runway there could be no doubt, we’d caught the pesky drone red-handed!

We’ve left reporting on this incident for a while on purpose, because our intent here is to present an informed analysis rather than breathlessly commenting on the news. There is little point in regurgitating what can easily be read in every newspaper, so instead we should be looking at what wasn’t in the newspapers.

In the coverage of those lights over Heathrow, we saw plenty of reporting of those lights in the sky, but what we didn’t see was any results of an investigation of them. We’re not aeronautical experts here at Hackaday, so we sought out some members of our community who do have expertise in this area. Asking them about the incident quickly revealed a verifiable culprit.

[Andrew Hyams] is both Chair of Team MiniAirshow and co-host of the Let’s Drone Out Podcast, and using ADSB tracking data he was able to demonstrate that there had been a conventional aircraft in the air over Heathrow during the time in which the lights had been spotted. G-MPSC is a Eurocopter-Kawasaki EC-145 helicopter, and while it’s not exactly a famous aircraft, it’s a common sight around the capital as one of the Metropolitan Police helicopters. That’s right, there is a distinct possibility that a significant number of the reported drone sightings at Heathrow were of the police helicopter rather than of any drone.

The ADSB records show that the police helicopter arrived in the Heathrow area at about 17:33 on the 8th of January and left at about 18:26, having spent a considerable time hovering over various parts of the airport environs through the time that observers on the ground claimed to have seen some lights in the sky.

Confusing a Hovering Helicopter for a Drone

So some very basic investigation on the part of a Hackaday reader with some knowledge of an ADSB tracking website was enough to confirm that the source of these sightings was likely not in fact a drone, but the Metropolitan Police helicopter. It’s quite likely that G-MPSC arrived on the scene in the wake of the initial report and was not the reason the airport was closed in the first place. Its presence as the possible cause of the spate of subsequent drone sightings amply demonstrates the complete futility of depending upon reports from uninformed observers on the ground. We don’t know what caused the initial sighting, but we do know there has been no tangible evidence produced for a drone being present.

The work of a journalist has many facets, but at its heart the responsibilities are two-fold. We report the news, and we investigate it. A Hackaday example of the first might be to tell the world about the launch of a new 3D printer, while the second might be going behind a manufacturer’s denials to find the truth behind reports of fires involving a particular 3D printer model. When we are presented with something our job is to ask questions even when we know what the answers will be, because the real stories come in not taking what we are given at face value. And when something appears that is outside our personal areas of expertise, we enlist the help of experts to inform us in our writing.

In this case it is abundantly clear that the journalists reporting from Heathrow followed up the bungled response at Gatwick by performing the same act a few weeks later without investigating the reliability of the source of the sightings.

Repeat After Us: Show Us The Drone 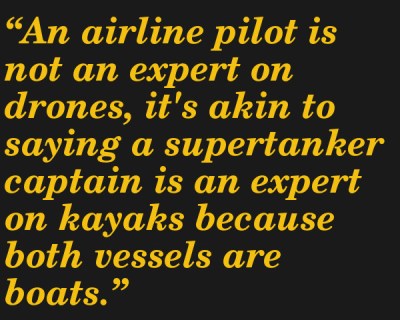 If a Hackaday reader can spend ten minutes with a web browser to reveal G-MPSC’s path that night then it is not unreasonable to expect that the formidable investigative resources of a global news organisation could do the same. We need to see better reporting, a readiness to investigate official accounts rather than regurgitate them, and above all a willingness to consult experts in the field rather than people from other fields with a vested interest. An airline pilot is not an expert on drones, it’s akin to saying a supertanker captain is an expert on kayaks because both vessels are boats.

This feels as though we are repeating the same story over and over again, but it’s important to say once more why accurate reporting and good incident investigation is vital in drone incidents. It goes without saying that fliers breaching protected airspace and putting lives in danger should be prosecuted, in fact almost unnoticed among the two airport closure stories we have a case of exactly that happening. A man is facing criminal charges for flying a machine in a field near Heathrow on Christmas Eve, and though it’s probable he’s no terrorist but simply an idiot who decided on some recreational flight in an inappropriate place, it’s entirely appropriate for him to be brought to book.

Where the problem comes is that all the other incidents are being reported unquestionably as involving drones with very little tangible evidence beyond something unidentifiable in the air seen by an uninformed member of the public. This forms the public record of drone incidents, and in turn informs the official response. As a result we are in a full-blown moral panic about drones from which will undoubtedly come bad laws. We saw that the first official response at Gatwick was to round up a local drone enthusiast they found on Facebook, so it’s not an unreasonable step to imagine that proposed new powers for police on the matter could be similarly abused.

It’s a depressing prospect that we are expecting to spend time in the future reporting on harassment of responsible drone fliers, and that there is a real likelihood that members of our community could find themselves in the nick when their only crime has been to come to the attention of authorities anxious to be seen to be doing something. It feels as though we are a lone voice in the wilderness on this issue, but we don’t think it is inappropriate to ask for better reporting and investigation of drone stories. Since there is invariably no tangible evidence in reported drone incidents this is not an unreasonable thing to say: Show us the drone.