The reigning champion in the particle-smashing world is the large hadron collider (LHC), which also happens to be at CERN. Through its 27 km circular accelerator, this collider has thus far managed to accelerate beams of protons to energies of 6.5 TeV. Two such beams rotating in opposite directions are trained on one another to produce collision energies of 13 TeV (13 x 1012 electron volts). Just for reference, those old CRT monitors and televisions we used to stare at accelerated electrons to around 20 keV (650 million times less), and still required leaded glass in the tube to shield us from the x-rays produced.

During the nearly ten years since the LHC became operational, it has provided real insights into the mysteries of the universe. Perhaps its most notable achievement was the announcement in 2012 of the confirmation of the Higgs boson, a particle that had eluded researchers since it was first proposed in 1964. Because of its high mass, this boson required very energetic collisions to be produced, and due to its short lifetime, was very difficult to detect.

The LHC is scheduled to be operational through 2035, which is why the future circular collider is being proposed. The current accelerator just finished its second run spanning from 2015-2018, and will now be shut down for two years to increase its energy to the original design point of 14 TeV (7 per beam). During this so-called “long shutdown 2” period, the LHC will also receive luminosity upgrades, including increasing the injector brightness to get more particles in the beam. The goal is to get the refurbished collider, to eventually be known as the high-luminosity LHC (HL-LHC) operational by 2025. By increasing the brightness of the beams by a factor of 10, scientists will proportionately increase the collision rate, creating more interesting events to study.

Given the successes of the LHC, people naturally ask why we need a new, larger collider?

To understand the need for the FCC, it helps to take a brief tour of what we know about the building blocks that make up our universe. Our current knowledge is succinctly summed up in the so-called Standard Model, which comprises 17 particles.

The model divides the particles into two broad divisions: fermions and bosons. Fermions make up the matter in the universe, while bosons carry the forces between them. The fermions are further divided into three generations of four particles each. The first generation of matter particles contains two quarks (named up and down), the electron, and the electron neutrino. This set is enough to construct what we typically think of as matter in the universe: the up and down quarks combine to make protons and neutrons, and adding electrons allows us to make atoms as we desire. The second and third generations of matter particles are much heavier analogs of the first generation particles and very unstable; they’re only seen as a product of energetic reactions.

Of the five remaining particles, the bosons, three each carry one of the fundamental forces observed in the universe. (Gravity, the fourth observed force, is not part of the Standard Model). The gluon carries the strong force, which binds quarks into protons and neutrons, then in turn binds these into atomic nuclei. The W and Z bosons carry the weak nuclear force, causing some forms of radioactive decay. Electromagnetic force is carried by the photon, which is ultimately responsible for many of the hacks posted on these pages.

Finally, we come to the Higgs boson, which was initially viewed as an after-thought to the Standard Model. It turns out that where the particles get their intrinsic mass had been something of a mystery. Then in the 1960s, the theory of the Brout-Englert-Higgs mechanism was worked out. This theory predicted the existence of what is now known as the Higgs field, which gives rise to the mass of the other particles.

Interestingly, the Higgs boson, whose existence was confirmed by the LHC in 2012, is not itself responsible for communicating mass to the other particles. Instead, the Higgs boson is merely an artifact of the Higgs field itself; given enough energy, we can create a ripple in the field – this ripple is detectable as a particle. By detecting the particle, the existence of the field itself can be inferred.

It sounds pretty well buttoned up. So, what’s left to find?

Even with the success of the Standard Model, there are a number of unanswered questions in particle physics that the new proposed collider might shed some light on.

If your head was spinning during my brief discussion of the Standard Model particles, you’re not alone. Physicists want to know why there are three generations of matter particles, and why they have such different masses. It would seem that having just the first, stable, generation would be enough to build a nice universe; why must we have the other 8 particles?

Some of the other questions surrounding the very small world of particle physics stem from observations at the largest scales of the universe. For instance, observations from deep space have shown that gravity is too weak to hold galaxies together at the rate they are rotating; they really should be tearing themselves apart. To balance the universe, physicists have predicted the existence of dark matter, which has mass, but doesn’t interact (or only weakly interacts) with photons, so is difficult to detect directly. Further evidence for the existence of dark matter comes from the gravitational lensing observed over vast stretches of space: some unaccounted for mass is bending light rays as they travel to us from the outer reaches of the universe. This bending isn’t from the dark matter interacting with the photons directly; the theory is that it can’t do that. Instead, the mass of the dark matter warps space itself, like all other mass does. 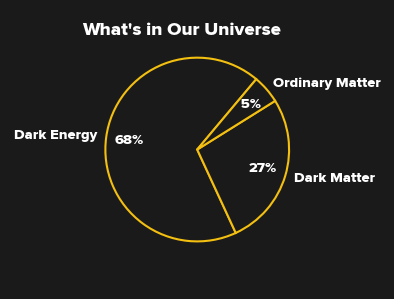 Lest you think that dark matter is a small correction to a theory that is close to correct, it’s estimated that the normal matter we experience every day accounts for only 5% of mass in the universe; dark matter is hypothesized to comprise 27%. That leaves a balance of 68%, which may belong to something called dark energy, which is believed to fill the “empty” vacuum of space. This hypothesized dark energy creates a repulsive force that explains the observed expansion rate of the universe. Both strange effects have huge consequences on massive scales, but have never been observed in the smaller realm, and the Standard Model doesn’t encompass either one. They also might be impossible to detect directly in a collider. But, if we were able to create dark matter particles with accelerators like the FCC, we could infer their presence by an energy deficit: any energy that went into their creation would “disappear” from the experiment.

While we’re on the topic, there’s the mystery of gravity itself. Gravity is amazingly weak compared to the other three forces: mystery number one. Also, no theory has every successfully combined gravity with quantum physics; it remains outside the Standard Model. Unifying the two is considered one of the many Holy Grails of physics.

Moving back to the micro scale, more mysteries await. One mystery is why we see matter in the world at all – the question of baryon asymmetry. From what we know so far, matter and antimatter should have been created in equal proportions after the Big Bang, only to subsequently annihilate each other. Instead, we live in a world full of matter, so something wasn’t exactly balanced. Observations show that the imbalance was incredibly small – something one the order of one part in a billion, but nonetheless, here we are. What caused this asymmetry that we’re so lucky to observe?

So, what will the new collider provide that the current LHC doesn’t? Well, the FCC is really an outline for three new colliders, each aimed at a different set of problems. One of the proposals is for a high-energy version of the LHC. This HE-LHC, as it is being called, would nearly double the current collision energy to 27 TeV with twice the luminosity planned for the HE-LHC, and would re-use the existing 27 km tunnel that currently houses the LHC.

More ambitious are the other two proposals, which would require a new 80-100 km tunnel to be excavated. The machines would come on-line serially in 2040 and 2050, costing $10.2 billion and $17 billion. $5.6 billion of that is allocated just for digging the new tunnel, but the number may be premature: Elon Musk has already tweeted that his Boring Company could save CERN “several billion euros” on construction. This tunnel would house both the FCC-ee, an electron-positron collider, and the FCC-hh, a new proton-proton colliding machine.

The FCC-ee, with a proposed 90-350 GeV energy would be used to measure the properties of the Z, W, and Higgs bosons with greater accuracy. It could also greatly improve measurements of strong interactions and properties of the massive top quark. The FCC-hh, on the other hand, is essentially an LHC on steroids, with a target collision energy of 100 TeV, more than seven times that of the LHC. It would also increase luminosity by a factor of 50, producing that many more interactions to detect and study.

One of the goals of these new machines is improved accuracy in measurements of parameters of known particles. These improved measurements would allow detection of small deviations from the Standard Model, which could lead to new areas to explore. Then, of course, there’s the possibility of the most exciting thing in science: finding something you didn’t expect.

But beyond the new understanding of our universe that may come, large, ambitious projects like the FCC inevitably lead to innovations in other fields some might consider more practical. Like the LHC before it, the FCC will require new developments in high-field magnets, superconductors, materials, vacuum and refrigeration technologies, electronics, and large-scale computing. These innovations will spill over into other fields, improving our engineering knowledge.

The price tag for the new proposal sounds pretty high, but CERN estimates that society will receive $1.30 in value for each $1 invested. Luckily, there are no conservation laws in finance.

88 thoughts on “The Future Circular Collider: Can It Unlock Mysteries Of The Universe?”