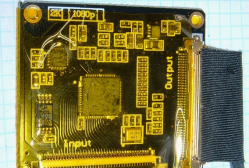 With the news full of cybersecurity stories, [Syonyk] thought about the risk of putting a board of questionable origin in his laptop. However, the board doesn’t interface at all with the CPU, so it seems unlikely that it could do anything more than scrape the screen and it would not have an easy way to send the data away.

Being a veteran of many laptop teardowns, he had no trouble opening this one — the ThinkPad is known to be relatively easy to work on. He does pass along some good tips about making sure you don’t accidentally blow fuses.

It looked like a lot of work, but none of it was difficult. In addition to having a better display, the laptop also now has a higher resolution. A pretty good upgrade if you plan on keeping the machine going.

A lot of people like to hack ThinkPads. You can upgrade practically all of one, if you have a mind to do so.

40 thoughts on “Hack A ThinkPad Display”