A few years ago, I was out at the W6TRW swap meet at the parking lot of Northrop Grumman in Redondo Beach, California. Tucked away between TVs shaped like polar bears and an infinite variety of cell phone chargers and wall warts was a small wooden box. There was a latch, a wooden handle, and on the side a DB-25 port. There was a switch for half duplex and full duplex. I knew what this was. This was a modem. A wooden modem. Specifically, a Livermore Data Systems acoustically coupled modem from 1965 or thereabouts.

The probability of knowing what an acoustically coupled modem looks like is inversely proportional to knowing what Fortnite is, so for anyone reading this who has no idea what I’m talking about, I’ll spell it out. Before there was WiFi and Ethernet and cable modems and fiber everywhere, you connected to the Internet and BBSes via phone lines. A modem turns digital data, in this case a serial connection, into analog data or sound. Oh yeah, we had phone lines, too. The phone lines and the phones in your house were owned by AT&T. Yes, you rented a phone from the phone company.

90s kids might remember plugging in a US Robotics modem into your computer, then plugging an RJ-11 jack into the modem. When this wooden modem was built, that would have been illegal. Starting with the communications act of 1934, it was illegal to attach anything to the phone in your house. This changed in 1956 with Hush-A-Phone Corp v. United States, which ruled you could mechanically attach something to a phone’s headset. (In Hush-A-Phone’s case, it was a small box that fit over a candlestick phone to give you more privacy.)

The right to attach something to AT&T’s equipment changed again in 1968 with Carterphone decision that allowed anyone to connect something electronically to AT&T’s network. This opened the door for plugging an RJ-11 phone jack directly into your computer, but it wasn’t until 1978 that the tariffs, specifications, and certifications were worked out. The acoustically coupled modem was the solution to sending data through the phone lines from 1956 until 1978. It was a hack of the legal system.

This leaves an ancient modem like the one sitting on my desk in an odd position in history. It was designed, marketed and sold before the Carterphone decision, and thus could not connect directly to AT&T’s network. It was engineered before many of the integrated chips we take for granted were rendered in silicon. The first version of this modem was introduced only a year or so after the Bell 103 modem, the first commercially available modem, and is an excellent example of what can be done with thirteen or so transistors. It’s time for the teardown, so let’s dig in.

The modern history of this modem goes back almost a decade, to a single video from [phreakmonkey] who was given a Livermore Data Systems Model A modem by the widow of an IBM engineer. This eventually became a fantastically popular video on YouTube, and a talk at Defcon 17.

Items of note from [preakmonkey]’s demo of his modem is that his was an extremely early model, with a serial number in the 200s. So far as I can see, his wooden box is made out of walnut, with dovetail joints. According to [preakmonkey], the type of joint on the wooden box will tell you how old it is; dovetails are labor-intensive, and the first production units were simply not optimized for production. Later units, around serial number 850, used teak with box joints that were much more suited for mass production than dovetails. Still later units, like mine, used a rabbet on all the joints. This is a clear optimization in the production process that allowed Livermore Data Systems to crank out more modems faster. 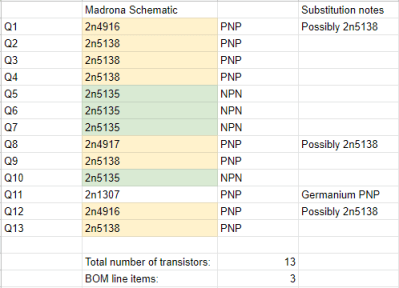 This modem has been dissected before; in 2007, [Brent Hilpert] found one of these modems in surplus, and documented the internals. The schematic is especially interesting. There are thirteen individual transistors in this modem, all a mix of relatively standard, contemporary PNP and NPN general purpose transistors. There is one Germanium PNP transistor which is there for reasons I cannot understand, but for the most part these components are standard, off-the-shelf items that are still available as New Old Stock. You can buy all the transistors to make this modem today for under twenty dollars. If you want to build your own acoustic modem, you’re going to spend more on the tiny transformers.

Apart from the lack of an acoustic coupler, this modem is more or less exactly what the documentation and references told me. There is a backplane of sorts, holding three cards. One card holds the power supply (less transformer), another card holds the modulator, and another holds the demodulator. The transistor date codes, specifically for the 2n5138 transistors are from the 37th week of 1969. Nice. This puts the date of manufacture for the transistors in September of 1969, and the date of manufacture sometime after that. Unfortunately, there’s no way of narrowing down the vintage of this modem any further, but it’s entirely possible it was built and shipped before 1970.

Is This Thing Worth Repairing?

My initial draw to this modem finding it at a ham swap meet was simply to own it. It’s a wooden modem, and I don’t think anyone I know respects exactly how cool that is. It’s on objet d’art, and it’s useful to store various sundries. I have considered repairing or refurbishing this modem, however there are a few things that make this impractical.

First, there is no acoustic coupler. This, I believe, is the reason why no one at the swap meet realized what it was. The Livermore Data Systems emblem and serial number was also adhered to the acoustic coupler, and without that, you would really have no idea what you were looking at unless you had an intimate knowledge of the garbage pile of a warehouse in a vintage computer museum. But I could easily 3D print an acoustic coupler, and that might be tempting.

Secondly, this modem is completely untested and half a century old. I guarantee the caps will need to be replaced, and the carbon composition caps are out of spec. I would need to reengineer the entire device to repair it, and there are better things I could do if I wanted to make my own modem.

Finally, if I wanted to engineer my own modem, I could just build a data toilet. This is a German / Chaos Computer Club project from 1985, built in response to modems being highly regulated by the Deutsche Bundespost. From a design standpoint, the data toilet is much simpler and much more capable. It’s built around an AM7910 chip that supports up to 1200 baud, and these chips are somehow still available from the usual online retailers. If I wanted to build a modem from scratch, this is how I would do it, not with discrete transistors.

Unfortunately, it’s just not worth the time to repair this ancient wooden modem, but a good teardown does give some great insight into how things were built before there were integrated circuits in everything. It’s an object of curiosity, or at least it is until I can find an acoustic coupler for it.