You’ve got a machine hooked up to the Internet via a shiny new cellular modem, which you plan to administer remotely. You do a quick check on the external IP, and try and log in from another PC. Try as you might, SSH simply won’t connect. What gives?

The reality of the modern internet is that most clients no longer get their own unique IPv4 address. There simply aren’t enough to go around anymore. Instead, most telecommunications operators use Carrier Grade Network Address Translation which allows a single external address to be shared by many customers. This can get in the way of direct connection attempts from the outside world. Even if that’s not the case, most cellular operators tend to block inbound connections by default. However, there is a way around this quandary – using a VPN. END_OF_DOCUMENT_TOKEN_TO_BE_REPLACED

END_OF_DOCUMENT_TOKEN_TO_BE_REPLACED

Some like to garden in their spare time, while others prefer to smoke cigars or fold complicated origami figurines. Security researcher [CTurt] seems to enjoy cracking consoles instead, and had a go at exploiting the Nintendo 64 over an obscure modem interface.

The 1990s were a wild time, where games shipped in cartridges. This format opened up crazy possibilities to add additional hardware to the cartridge itself. Perhaps most famously, Nintendo packed in the SuperFX chip to enable 3D graphics on the Super Nintendo. Later on, the N64 game Morita Shogi 64 shipped with an entire telephone modem in the cartridge itself.  The resulting exploit is therefore dubbed “shogihax”.

Armed with a dodgy GameShark and a decompiler, [CTurt] set to work. Through careful parsing of the code, they were able to find a suitable overflow bug in the game when using the modem. Unlike more pedestrian savegame hacks, this not only allowed for the execution of arbitrary code but also the modem interface means that it’s possible to continually stream more data to the console on an ad-hoc basis.

It’s a great hack that takes advantage of a relatively accessible cartridge, rather than relying on more obscure hardware such as the N64DD modem or other rarities. We’ve seen other N64 homebrew hacks before, too. Video after the break.

Thanks to [grifter] for the tip!

END_OF_DOCUMENT_TOKEN_TO_BE_REPLACED

Readers of a certain age will no doubt remember the external modems that used to sit next to their computers, with the madly flashing LEDs and cacophony of familiar squeals announcing your impending connection to a realm of infinite possibilities. By comparison, connecting to the Internet these days is about as exciting as flicking on the kitchen light. Perhaps even less so.

But while we don’t use them to connect our devices to the Internet anymore, that doesn’t mean the analog modem is completely without its use. The OpenModem by [Mark Qvist] is an open hardware and software audio frequency-shift keying (AFSK) modem that recalls some of the charm (and connection speeds) of those early devices. 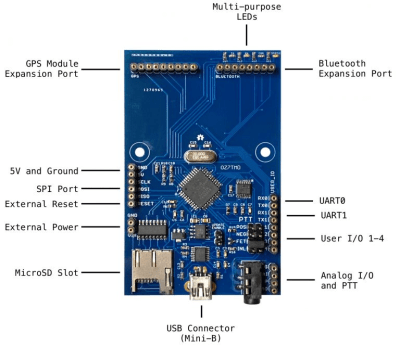 It’s intended primarily for packet radio communications, and as such is designed to tie into a radio’s Push-to-Talk functionality with a standard 3.5 mm jack connector. Support for AES-128 encryption means it will take a bit more than an RTL-SDR to eavesdrop on your communications. Though if you’re really worried about others listening in, the project page says you could even use the OpenModem over a wired connection as you would have in the old days.

If you just want a simple and reliable way to get a secure AFSK communication link going, the OpenModem looks like it would be a great choice. But more than that, it offers a compelling platform for learning and experimentation. The hardware is compatible with the Arduino IDE, so you can even write your own firmware should you want to spin up your own take on this classic communications device.

The OpenModem is the evolution of the MicroModem that [Mark] developed years ago, and it’s clear that the project has come a long way since then. Of course, if you’re more about the look than the underlying technology, you could always just put a WiFi access point into the case of an old analog modem.

[Thanks to Boofdas for the tip.]