Many electric cars feature a timer capability that allows the owner to set which hours they want the vehicle to start pulling a charge. This lets the thrifty EV owner take advantage of the fact that the cost of electricity generally goes down late at night when the demand is lower. The Renault Zoe that [Ryan Walmsley] owns has this feature, but not only does it cost him extra to have it enabled, it’s kind of a hassle to use. So being an enterprising hacker, he decided to implement his own timer in the charger itself. 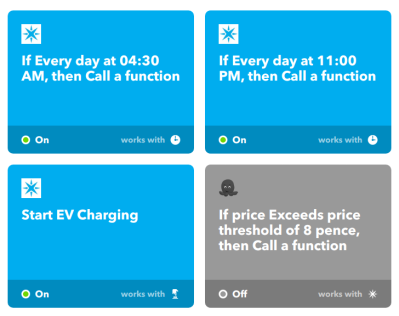 Now controlling high voltages with a lowly microcontroller might sound dangerous, but it’s actually not nearly as tricky as you might think. The charger and the vehicle actually communicate with low-voltage signals to determine things like the charge rate, so it turns out you don’t need to cut into the AC side of things at all. You just need to intercept the control signals between the two devices and modify them accordingly.

Or do you? As [Ryan] eventually realized, he didn’t need to bother learning how the control signals actually worked since he wasn’t trying to do anything tricky like set the charge rate. He just wanted to be able to stop and start the charging according to what time it was. So all he had to do was put the control signal from his car through a relay controlled by a Particle Photon, allowing him to selectively block communication.

The charger also had an optional key lock, which essentially turns the controller off when the contacts are shorted. [Ryan] put a relay on that as well so he could be absolutely sure the charger cuts the juice at the appropriate time. Then it was just a matter of getting the schedule configured with IFTTT. He mentions the system could even be tweaked to automatically control the charger based on the instantaneous cost of electricity provided by the utility company, rather than assuming overnight is always the most economical.

We’ve seen a fair amount of electric car hacking, but with only a few exceptions, the projects always steer clear of modifying the actual chargers themselves. In general hackers feel a lot safer playing around in the world of DC, but as [Ryan] has shown, safely hacking your EV charger is possible if you do your homework.

21 thoughts on “Putting Some Smarts Into An Electric Car Charger”