Engineering isn’t just about inventing new things. Sometimes, it is all about doing things better, cheaper and faster. That was what Elsie MacGill did for the “Hurricane” fighter plane in World War II, earning her the nickname of “Queen of the Hurricanes”.

Elizabeth MacGill was born in Vancouver in 1905, part of a prominent banking family and the daughter of a pioneering judge who had long campaigned for the rights of women and children. She was home-schooled and showed an aptitude for fixing things from an early age. She studied at the University of Toronto starting in 1923, becoming the first Canadian woman to earn an engineering degree, despite contracting polio two weeks before her final exams. After graduation, she worked at an engineering firm and decided to specialize in the new field of aeronautical engineering. While working days at the engineering company, she also earned a masters degree in aeronautical engineering at the University of Michigan in 1927, the first awarded to a woman in North America.

In 1938 she submitted a paper to the Royal Aeronautical Society called “Simplified Performance Calculations for Aeroplanes”, which was widely praised. This paper detailed several ingenious ways to simplify the complex calculations that determined how an aircraft would perform, which were all still done by hand at the time. In the same year, she joined the Canadian Car and Foundry company (known as CanCar) as the chief engineer at their new airplane factory in Thunder Bay. Here, she designed a new bi-wing training aircraft called the Maple Leaf II to train new pilots: it was very hard to stall and easy to recover in a spin. This was also one of the first planes to include an anti-spin parachute that could be deployed to increase drag and help the pilot recover. Although MacGill did not have a pilots license herself, she went on the first test flight of every one of the planes she worked on, a sure vote of confidence in her own abilities.

The biggest challenge came in 1940 when the company was awarded the contract to build Hurricane fighters for the Canadian and UK air force. CanCar was sent the blueprints for the plane, but the war meant that they were not shipped any of the tooling and production line equipment. That meant they had to take the designs and create a production line completely from scratch.

It was a huge challenge, and it wasn’t helped by newspapers which declared that, because cars were rolling off production lines, airplanes should be able to do the same without delay. However, the design of airplanes at the time was not standardized: every part was custom and required a dedicated production system. While cars were made of standard, stamped metal parts, airplanes were made of custom designed, hand-drilled parts. MacGill wrote a paper on the issues, declaring that:

“To afford cheapness and rapid reproduction the majority of parts must be manufactured by machines. Presses must supplant jigs. Manual labour, skilled and unskilled, must be reduced to a minimum… The production engineer cannot, at will, put any commodity on a mass production basis. Aeroplanes are not like baby carriages. The easy acceptance of the applicability of mass production methods to aeroplane construction arises from sad ignorance of the problems involved.”

In other words, making airplanes is complicated, and making them in large numbers is even more complicated because everything is customized.

MacGill rose to the challenge, creating a state of the art production line from scratch within a year. After two years, the factory was producing over 100 Hurricanes a month. Meanwhile, she also added to the design of the airplane, designing and building the first de-icer on a fast fighter and adding an option for skis that allowed it to land on snow and ice: essential for the cold eastern front of the war. Given that the company had to start from scratch, that’s a considerable achievement, and the planes that came off this line were used in combat around the world.

Her genius lay in understanding how to create a production line when every part of the design was bespoke, to break down the process to the smallest possible step and automate as much as possible. In an era before the emergence of modern large-scale production line techniques, her insight is striking. She understood that design and production are not the same things, and that they can often be at cross purposes. The set of skills that a design engineer might need are very different from those required by a production engineer, but both are equally important to the end product. 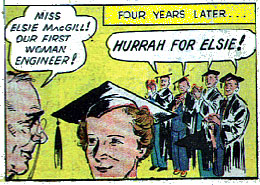 Her contribution to the war effort was immortalized in a comic book that named her as “The Queen of the Hurricanes” (PDF link). After the war, MacGill set up her own consultancy company, advising aeronautical companies on how to learn the same lessons of scaling production she struggled with during the war. She also became an advocate for the rights of women, joining the Royal Commission on the Status of Women in Canada in the late 1960’s, and heading many groups that promoted the work of women in science and industry. She continued to advocate for the role of women in these fields until her death in 1980, and has inspired a generation of women to work in these industries.

20 thoughts on “The Queen Of The Hurricanes”