It is hard to remember that practical computers haven’t been around for even a century, yet. Modern computers have been around an even shorter period. Yet somehow people computed tables, kept ledgers, and even wrote books without any help from computers at all. Sometimes they just used brute force but sometimes they used little tricks that we’ve almost forgotten. For example, only a few of us remember how to use slide rules, but they helped send people to the moon. But what did database management look like in, say, 1925? You might think it was nothing but a filing cabinet and someone who knew how to find things in it. But there was actually a better system that had fairly wide use.

How Do You Sort Massive Amounts of Paper Records?

Not that people didn’t have filing cabinets. The problem with those is that you have a single primary key or you have a lot of duplication. Consider report cards for students. If they were in a filing cabinet, you’d probably want the folders to have student’s names. Or perhaps their grade. Or maybe their teacher. With a database table, that’s easy to just create a view based on a query for any of those items. In a filing cabinet, I’d need three copies of the report card — in a day when copies were hard to produce. Sure, you could come up with some scheme, like the class and teacher folders had lists of names, but that’s a hack and not in a good way.

Besides, what happens if someone wants the report cards for all girls in the 8th, 9th, and 10th grades? That’s a lot of manual selecting. Report cards are pretty simple, too. Imagine if you had a really complex data set.

The High-Tech of Cutting a Notch 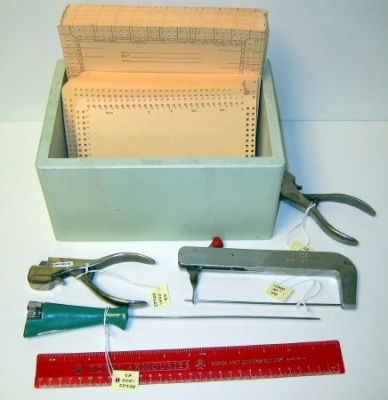 The answer was in a type of punched card. Not the punched cards we know from vintage computers. These cards had holes punched around the edges. They were often called edge-punched cards or edge-notched cards. We’ve also heard them called “needle cards” for reasons that will soon become apparent. There were several well-known brand names including Cope-Chat, E-Z Sort, Flexisort, and McBee Keysort cards.

Let’s go back to our report card example. If your report card was on an edge-punch card there would be holes all around it with little labels. One might say 1st grade. Another 2nd grade. Another might say “male” next to one that said “female.” Whoever produced the card would use some tool to open up the holes that applied to that card. So if a card was for a girl in Mrs. Miller’s 4th-grade class, you’d open up the female, 4th grade, and Mrs. Miller notches.

Looking for punched holes isn’t really all that useful, though. You might as well just look for text on the card. The value is when you stack the cards.

You can take the stack in any order and put a long needle — like a knitting needle — through, say, the 4th-grade hole. When you lift the needle, all the ones that have an intact hole in that spot will stay on the needle. Any that have the hole open will fall down on your desk.

Of course, the best queries have multiple parts. If you pick up the cards from your desk and repeat the operation with the “female” notch and the “Mrs. Miller” notch, you’ve done a logical and operation. You could also use multiple needles, but that gets hard to handle eventually. If you repeat the operations on the cards that stayed on the needle you are doing an or operation. If you want to logically invert, you just use the stack in your hand instead of the cards on your desk. Easy.

Of course, the cards are not going to stay sorted that way. In addition, like most things, the cards got more complicated as time went on.

Another common enhancement was to cut one corner of each card so that if a card were not lined up correctly in a stack, it would poke out (you can see a small corner at the upper right of the card in the picture). Some cards had two levels of holes so you could do a built-in AND operation. 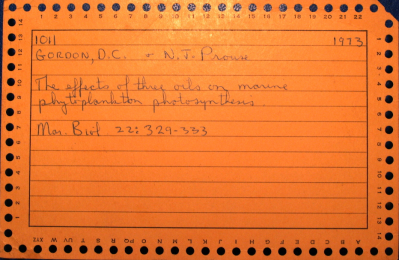 Zatocoding was a way to solve a particularly difficult problem with the cards. For a school report card, you might have 12 grades and putting 12 holes in the edge of a card isn’t a problem. But suppose you were trying to do library book records (if you are old enough to remember a card catalog — another type of database). There could be hundreds of subjects. You can have a hole for history, electronics, horror, and the hundreds of other topics you might want to index.

Zatocoding came to the rescue on this problem. The key is to pick a pattern of multiple holes for each topic. American history might use 1, 5, and 15. Electronics might be 5, 12, and 16. By putting three needles in at one time, the cards that fall out would be for American history. Because some books could be in multiple categories, it is possible that some other books would fall out, too. For example, a book that fell into electronics {5,12,16} and two other categories {1,9,11} and {4,7,15} would fall out on searches for American history. You’d have to manually reject those.

The selection of how many needles and how the patterns created varied by scheme — Zatocoding was just one method. But the idea was to map a bunch of items onto a smaller number of holes. If you did it right, you’d eliminate or at least minimize the number of items you’d have to reject.

For numbers, you could use punches for 7 4 2 1 0 which would allow you encode any number from 0-9. If you understood binary you could do the job in 4 holes, but the 74210 system was more common. You can even sort numbers with a small number of operations.

There were apparently other similar systems that used punches over the entire surface of the card. There were also peek-a-boo cards that had a similar function. Suppose our library has 5,000 books and we have sheets with numbers 1-5,000 preprinted. On one page we write “American History” and punch out the books that apply. On another page, we write “Electronics” and punch out the books for that one. If we want to see if any books exist on Electronics and American History we simply put the pages together and hold it to the light. Any holes that go all the way through the stack match. Then you have to go find the books by number.

Want to try your hand at McBee cards? Or want to prepare for the zombie apocalypse? The video below shows you how to repurpose a spiral punch. We hear you can also take wire cutters to a spiral notebook to liberate punched paper.