Yesterday we published a first look at the hardware found on the DEF CON 27 badge. Sporting a magnetically coupled wireless communications scheme rather than an RF-based one, and an interesting way to attach the lanyard both caught my attention right away. But the gemstone faceplate and LED diffuser has its own incredible backstory you don’t want to miss.

This morning Joe Grand — badge maker for this year and many of the glory years of hardware badges up through DC18 — took the stage to share his story of conceptualizing, prototyping, and shepherding the manufacturing process for 28,500 badges. Imagine the pressure of delivering a delightful concept, on-time, and on budget… well, almost on budget. During the talk he spilled the beans on the quartz crystal hanging off the front side of every PCB.

Wait, before you click away, believe me that the gemstone is at least as interesting as the electronics on this badge. Sure, you can go right now and order yourself a microcontroller, LEDs, and all the other bits shown on the circuit board. But you’ll have a decidedly harder time sourcing the disk of quartz that makes up the heft of this badge as its centerpiece and LED diffuser.

Joe made a lot of jokes about living in Portland, where there’s “a new-age crystal shop on every corner”. But his local vendors laughed when he approached them about sourcing 30,000 gemstones for the badge project. But they did give him the idea of swinging by the Tucson gem show, which is where his trip down the rabbit hole truly began. The gem con was full of wholesalers who themselves couldn’t supply the kind of quantity he actually needed, but they did hook him up with introductions to factories that were ready for a custom order.

Quartz before being harvested

The quartz is pulled out of the ground at a mine in Brazil as raw crystals about the size of a ridiculously heavy rugby ball. They’re shipped to a factory in China, where the labor-intensive process of turning them into a glossy coaster takes place.

Cutting each slice into a rough circle on a wet saw

Trip through a media polisher

The rough quartz is sliced to the approximately 5 mm finished thickness, before having the circle traced by hand. It’s then cut down to the lines on a wet saw, and hand-finished to final shape on a grinding wheel. A trip through a vibrating media polisher gives the surface a clear glass-like finish. 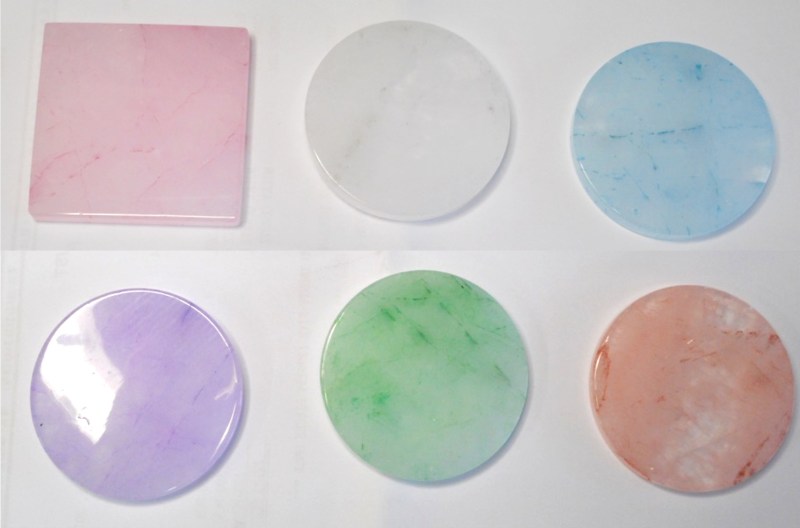 Joe had assumed this would be a much different process, possibly starting with a core-sample type of drilling process. But the nature of the stone itself seems to require a human eye for where to cut and where to place the final shape of the stone in each slice. General admission badges — known as Human — are used as-is. All of the “In-Human” badges (Speakers, Press, Goons which are the security staff) were dyed a color to match badge type.

These gems are a really special touch, even if the effort that goes into them is likely to be lost on most of the nearly 30,000 people at DEF CON this year. I’m glad that Joe Grand spent time in his talk to illuminate the backstory in this highly-involved little touch that literally makes every single badge unique. You can find the slides from his talk along with badge hardware info on the DEF CON media server.