Putting payloads into model rockets can be more complex than simply shoving stuff into an open spot, so [concretedog] put some work into making a modular payload tube for his current rocket. The nose cone for his rocket is quite large, so he opted to give it a secure payload area that doesn’t compromise or interfere with any of the structural or operational bits such as the parachute. 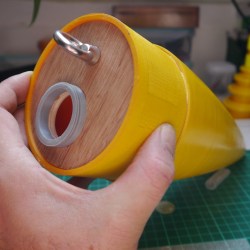 The payload container is a hollow tube with a 3D printed threaded adaptor attached to one end. Payload goes into the tube, and the tube inserts into a hole in the bulkhead, screwing down securely. The result is an easy way to send up something like a GPS tracker, possibly with a LoRa module attached to it. That combination is a popular one with high-altitude balloons, which, like rockets, also require people to retrieve them after not-entirely-predictable landings. LoRa wireless communications have very long range, but that doesn’t help if there’s an obstruction like a hill between you and the transmitter. In those cases, a simple LoRa repeater attached to a kite, long pole, or drone can save the day.