So What Is It? 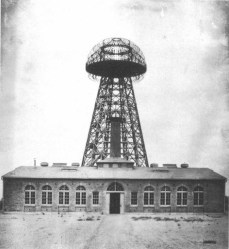 Of course, Google found a wealth of information on it. I’m not sure if I totally believe it or not, though. But the Van de Graf generator guess might not have been far off. The tower belongs to a company called Viziv Technologies. They claim they are doing experiments to transmit energy wirelessly — very much what Tesla was trying to do with his Wardenclyffe tower.

In fact, pictures of Wardenclyffe look suspiciously similar to the Texas tower. Here’s where it gets interesting though. While it might be ironic to read this on a web site: don’t believe everything you read on the internet.

The internet is a wealth of information. Some of it is true. The problem is sorting out which is true and which isn’t. Sometimes that’s easy in both directions. I can’t tell you the exact years Ronald Regan was in office, but I remember enough that if I read it was from 1981 to 1989 that sounds about right. If I read he started in 1820 or he was president for 30 years, I’d probably realize that was inaccurate.

Then there are the things that are just clearly not true. The Earth is flat. Nazis escaped to the dark side of the moon. But the real difficulty is the stories that seem outlandish but could be true.

Consider the time-traveling story about John Titor. His predictions didn’t pan out — not exactly — so probably a hoax, but at the time it could have been plausible. Cold fusion’s initial claims sounded good and many people still think they are able to produce it, but it is just fringe enough that it is hard to tell serious science from chicanery.

Wireless power transmission is pretty squarely in that camp. Like cold fusion, it isn’t a totally outlandish idea. Tesla thought he could do it and he was a pretty smart guy. However, the topic is also surrounded by a lot of crackpot free energy conspiracy theorists. The lumping of wireless energy with perpetual motion, cold fusion, and torus generators makes it hard to sift fact from fancy.

In particular, Viziv’s tower claims to use the Zenneck surface wave, traveling along the curvature of the Earth. Tesla also talked about Earth resonance, so it seems likely that the company is trying to finish what Tesla started at Wardenclyffe. You can read their technical brief as well as their take on the Zenneck wave.

I found a pretty good video from [tvecourse] about the tower. At least, it has some good video of the site, although it has some hints of conspiracy theory towards the end.

Failing to Draw a Conclusion

Is it legitimate? Beats me. I had never heard of a Zenneck surface wave before, but it does seem to be a thing. Viziv’s chief scientist mentions having done research on Zenneck waves. However, I also found an MIT paper that said that at least some Zenneck waves are impractical because they’d require an infinite source. Then again, a lot of engineering approximates impractical theories.

What I do know is there is a whopping big tower in the middle of Texas. Like I said earlier, it is now my second most interesting road trip drive by. The most interesting? A giant nude Belgian cyclops off the E17. Don’t ask.

But check out the science, and let us know what you think.