Donate your extra computer cycles to combat COVID-19. The Folding@Home project uses computers from all over the world connected through the Internet to simulate protein folding. The point is to generate the data necessary to discover treatments that can have an impact on how this virus affects humanity. The software models protein folding in a search for pharmaceutical treatments that will weaken the virus’ ability to attack the human immune system. Think of this like mining for bitcoin but instead we’re mining for a treatment to Coronavirus.

Initially developed at Standford University and released in the year 2000, this isn’t the first time Hackaday has advocated for Folding@Home. The “Team Hackaday” folding group was started by readers back in 2005 and that team number is still active, so let’s pile on and work our way up the rankings. At the time of writing, we’re ranked 267 in the world, can we get back up to number 30 like we were in 2008? To use the comparison to bitcoin once again, this is like a mining pool except what we end up with is a show of goodwill, something I think we can all use right about now.

Setting Up Your Computer for Folding@Home 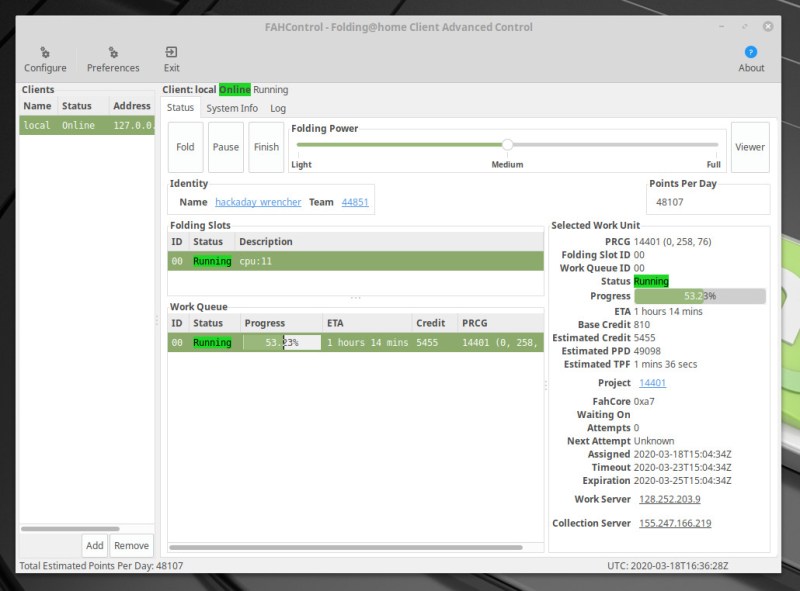 You can get set up in five minutes. The software package is just a few megabytes and configuration is minimal:

That’s about it, just open FAHControl and the software will connect to the Folding at Home servers and request a Work Unit (WU) — part of the protein folding math puzzle currently being solved. Once it has a WU the software will solve that unit and upload the result. Rinse and repeat and you’re a worker bee in a super-computer that’s distributed throughout the world.

The F@H project is seeing a surge of new computers on the network. Because of this you may run into a situation where no new WUs are getting downloaded. I experienced this on Wednesday morning and believe it’s simply caused by the buffer of work running out and needing to be replenished. The nice thing is you don’t need to do anything, so just let your instance run and it’ll get to work when more is available.

The software does allow you to use your GPU for much more efficient calculations, but that setup may be non-trivial and beyond the scope of this article. I suggest you just get the client up and running and then look to configure GPU as a later step.

Are you making a difference? Yes! But of course metrics tell this message the best. You can see the team summary above. This statistics page includes a user summary showing 21 active users right now, including the “hackaday_wrencher” instance I added when working on this article which is just beginning to score points.

This group has over 1600 members right now but most are inactive. Can we reactivate those? Can we double that number? Grab those gaming rigs and let the electrons flow. Folding@Home has made a huge impact on research over the last twenty years and now more than ever we can build on that groundwork by joining in to fight this global pandemic.