What is a FLOP anyway? 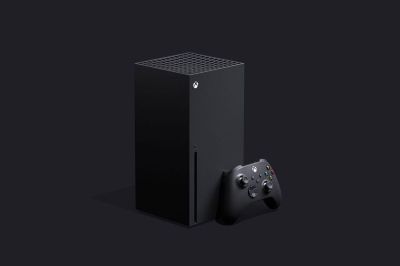 Typically, when we talk about “flops” with regards to a new console launch, we’re referring to something like the Sega Saturn, in which sales are drastically below expectations. In this case, we’re instead talking about FLOPS, or “floating point operations per second”. This measures the number of calculations a CPU or GPU can perform per second with floating point numbers. These days, it’s typical to talk about FP32 performance, or calculations with 32-bit floats. Scientific or other applications may be more concerned with FP64, or “double” performance, which typically returns a much lower figure.

The number of FLOPS a given processor can achieve is a way of comparing performance between different hardware. While software optimisations and different workloads mean that it’s not a perfect guide to how real-world applications perform, it’s a useful back-of-the-envelope number for comparison’s sake.

How Does The New Rig Stack Up?

Reports from Microsoft state that the GPU in the new Xbox Series X is capable of delivering 12 teraflops, based on AMD’s new RDNA 2.0 technology. Interesting to note is that the release talks about only the GPU performance. Over the last few decades, GPUs have come to exceed the raw processing power of CPUs, and thus this is the focus of the comparison.

For a consumer device that lives under a television, this is a monumental figure. In its time, Playstation 3 represented a huge advance in the amount of processing power tucked inside an affordable game console. Back then, the raw grunt of the PS3, combined with its ability to run Linux, led to a series of supercomputing clusters around the world. The biggest of these, the Condor Cluster, employed 1760 consoles, and was employed by the US Air Force for surveillance tasks. Capable of 500 teraflops, similar performance today could likely be gained with well under 100 Series X consoles. Unfortunately, Microsoft have announced no plans to allow users to run custom operating systems on the platform.

Comparing the Series X to contemporary computer hardware, performance is on par with NVIDIA’s current flagship GPU, the GeForce RTX 2080 TI, which delivers 13.45 teraflops with 32-bit floating point math. Given the capability to run dual-GPU systems on the PC platform, and the fact that the new Xbox won’t be released until later this year, PCs will retain the performance lead, as expected.

Looking into the supercomputer realm is a fun exercise. Way back in June 2000, ASCI Red held the #1 spot on the TOP500 list of the world’s most powerful supercomputers. The Xbox Series X should easily best this, and if you traveled back in time with one, you’d steal the crown. In the next publication in November, it had been beaten by its newer counterpart, ASCI White, with a real performance of 4.938 teraflops and a theoretical peak of 12.288. The Xbox Series X would still have a chance at holding the title until June of 2002, when NEC’s Earth Simulator came online, boasting over 35 teraflops in real-world tests. ASCI Red itself used 850kW in operation, with Earth Simulator using a monumental 3200 kW. It’s nice to know the Series X will sip only around 300 W in use. In twenty years we’ve made it possible for the world’s fastest supercomputer to make its way into the average living room for the most performant game of Fortnite possible. 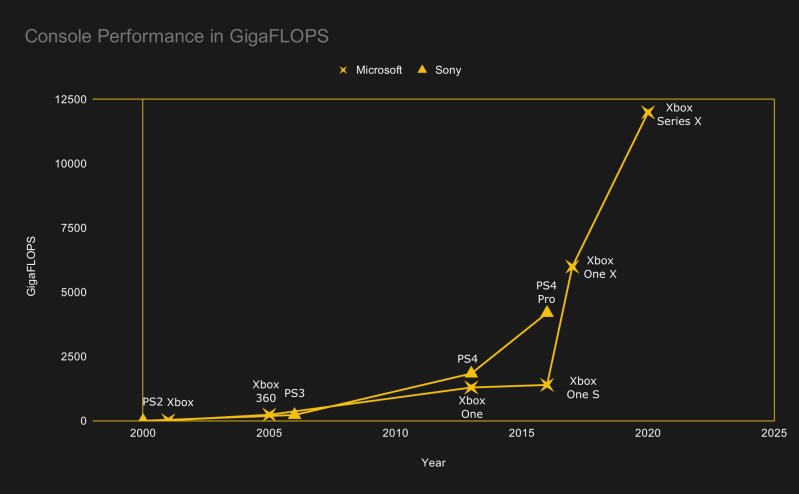 If we look at older consoles, the gap is vast. The Xbox 360 put out just 240 gigaflops, while the original Xbox made do with just 20 gigaflops. Going back a further generation, the Playstation 1 and Nintendo 64 made do with somewhere in the order of just 100 megaflops. Advances in hardware have come thick and fast, and the roughly half-decade lives of each console mean there’s a big jump between generations.

Going back further is hardly worth considering, as the performance is so glacial. Prior to the Playstation 1, floating point units were a luxury, and 32-bit architectures were only just getting started. However, some tests have indicate a Commodore 64 is capable of somewhere in the realm of 400 FLOPS per second — in BASIC, with no FPU. Now, somewhere between 12.5-17 million C64s were sold, making it the best selling computer in history. Add them all up, and you get 6.8 gigaflops – over an order of magnitude less than a single Series X. Obviously, there’s no real way to achieve this in practice, but it gives one a rough idea just how far we’ve come!

What It All Means

Fundamentally, the Xbox Series X continues the roughly exponential growth in computing power in the console market. This will enable ever prettier gaming experiences, with real-time ray tracing becoming a possibility, along with higher framerates and resolutions.

With the availability of purpose-built, high-end hardware in the PC space, it’s unlikely we’ll see the Series X used in other realms, which is a shame because Linux on Playstation 3 was pretty excellent. Despite the similarities to PC architectures, both Microsoft and Sony have been resolute in keeping their platforms locked down, stopping users from running their own code or operating systems. Regardless, it’s impressive to see the computing power that’s now brought to bear in our very own living rooms. Game on!