Nowadays, resin printers are highly accessible and can do some great stuff. But between isopropyl alcohol for part rinsing and the fact that some resins have a definite smell to them, ventilation can get important fast. The manufacturers don’t talk much about this part of the resin printing experience, but it’s there nevertheless. So what can be done when smells become a problem?

I recently had to deal with this when I printed several liters of resin worth of parts. That’s a lot of resin, and a lot of alcohol for part washing. Smells — which had never been much of a problem in my work area — suddenly became an issue.

Where Odors Come From

Smells come from two sources: the resin itself, and the isopropyl alcohol used for cleanup and part washing.

Most Resins Have a Smell 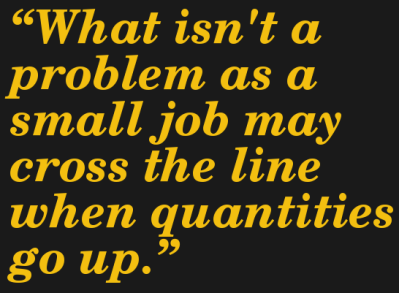 It’s an odor I describe as “raw plastic, with solvent undertones” and some are worse than others.

The variety of resins in my workshop doesn’t even come close to representing everything on the market, but I have given the sniff test to the ones I have on hand. The Elegoo brand resins (White, Translucent, and Grey) all have a distinct odor, with their Black resin smelling strongest overall. Monocure Flex100 resin definitely smells, and ApplyLabwork Modeling resin (advertised as being compatible with Formlabs printers) also clearly smells.

In my experience Formlabs standard resins (white, grey, and clear in particular) are standouts in that they have no particular odor to them, but Formlabs Durable does, and [Bunnie Huang] also noted that the Formlabs Draft resin had a very strong smell to it during his Form 3 teardown. There are many more out there.

Isopropyl alcohol is the usual choice for rinsing uncured resin from finished prints during post-processing, and alcohol also happens to rapidly evaporate at normal room temperature. This makes it easy to dry off finished prints, but it also means alcohol jumps at the chance to fill a work area with fumes.

Quantity Can Tip the Scales

What isn’t a problem as a small job may cross the line once quantities go up. Opening and pouring smelly resins, having them sit in an build tank, and the print process itself (which agitates the resin) all contribute to smelling up the immediate area. A small print job might be dealt with by taking a break and airing out the work area, but extended printing means those smells just keep coming.

With alcohol, the more drying and pouring and agitating is going on, the more evaporation and therefore the more smelly the area becomes. For larger jobs, automatic part washing starts to look attractive but there is a side effect. Machines like Formlabs’ Form Wash, Prusa’s CW1, and Anycubic’s upcoming Wash & Cure Machine all aim to make part washing more controlled and convenient, but they do not eliminate odors. Not only are these units not airtight while in use, but the agitation and part drying involves more evaporation than doing small jobs by hand, which is more easily done with sealed containers.

Ways to Deal With Odors

When I started a large and extended print job, frequent part washing combined with extended print times led to resin and alcohol smells dominating my work area. Odors were never an issue before, but It was clear I had to make some changes. Here are some options for doing smell control:

If smells are a problem for you, one or more of these should help get you back in control over your work area.

Getting surprised by smells can happen, and if it does, there are tools that can be used to mitigate it and keep the work area livable. Are there better options for extracting or otherwise handling smells or fumes? What have you done to handle them yourself? Know of any particularly nasty (or friendly) resins? Chime in with the comment section to let us know.

As a final note, there are now some newer resins advertised as water-washable, which sounds promising. Do you have experience with them? Do they smell less, or not at all? We’d love to hear from you in the comments.

20 thoughts on “3D Printering: When Resin Printing Gets Smelly”