Being a fan of pinball is bittersweet these days. In the go-go 1990s, you could still find pins in places like coffeehouses and the odd gas station here and there as the commercial arcade began to fade into the past. 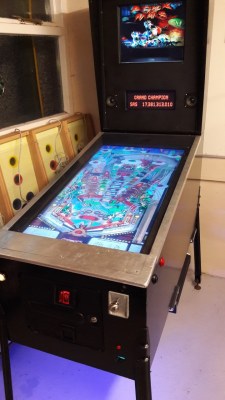 Things were looking up once booze-fueled b-arcades became a thing, but the pandemic economy may come for them soon enough.

Poor [smithsa3] doesn’t have a table around for hundreds of miles. Instead of settling for an older table or agonizing over the average price of newer tables, [smithsa3] found a happy medium and built a full-size virtual pinball cabinet to play pretty much any table there is. The only non-negotiable game was Addams Family, which you can see in the demo after the break.

Inside is a PC running PinballX, along with a 37″ TV for the playfield and two 17″ monitors that make up the backboard. Between the physical inputs and the faithful recreations of current and classic pinball games that are out there, this really is the best of both worlds.

We love that [smithsa3] combined stock and DIY hardware to pull this together. The cabinet uses standard legs and arcade buttons, but [smithsa3] built the plunger, interfaced it with an old keyboard controller, and made a coin slot mechanism that rejects everything but 10p coins.

Spend enough time playing pinball, and you’ll no doubt begin to fantasize about building your own. We’ve seen one or two of those, but not too many that can play themselves.