My son is just getting to the age that puts him in the crosshairs of all of the learn-to-code toys. And admittedly, we’ve been looking at some of those Logo-like toys where you can instruct a turtle-bot to make a few moves, and then to repeat them. After all, if breaking down a problem into sub-problems and automating the repetition isn’t the essence of programming, I don’t know what is.

But here’s the deal: I think drawing ‘bots are cooler than he does. If you ask a kid “hey, do you want a car that can draw?” that’s actually pretty low on the robot list. I’m not saying he won’t get into it once he’s got a little bit more coding under his belt and he can start to make it do fun things, but by itself, drawing just isn’t all that impressive. He can draw just fine, thank-you-very-much. 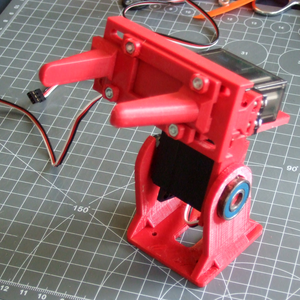 Meanwhile, I was making a robot arm. Or rather, I started up on yet another never-to-be-completed robot arm. (Frankly, I don’t know what I would do with a robot arm.) But at least I started with the gripper and wrist. Now that’s pretty cool for a kid, but the programming is waaaay too complicated. So I pulled the brains out and hooked up the servos to an RC plane remote. Just wiggling the thing around, duct-taped to the table, got him hooked. And this weekend, we’re building a remote controlled cherry-picker arm to put on a pole, because cherries are in season. His idea!

So no coding. He’s a little too young anyway, IMO. But silly little projects like these, stored deep in his subconscious, will give him a reason to program in the future, will make it plainly obvious that knowing how to program is useful. Now all I need is a reason to finish up a robot arm project…