A few months ago, I fell down the internet rabbit hole known as Ted Munk’s typewriter site. I don’t remember if I just saw this Brother EP43 typewriter for sale and searched for information about them, or went looking for one after reading about them. Either way, the result is the same — I gained a typewriter.

Now I’m not really a typewriter collector or anything, and this is my first word processor typewriter. When it arrived from Goodwill, I anxiously popped four ‘C’ cells in and hoped for the best. It made a print head noise, so that was a good sign. But almost immediately after that, there was a BANG! and then a puff of smoke wafted out from the innards. My tiny typewriter was toast.

Speaking of toast, this typewriter is thermal, which is why it takes such awesome battery power. Thermal is probably the absolute best feature it could possibly have, because as long as there is electricity and thermal fax paper to be had on Earth, this typewriter can be used endlessly, no ribbon necessary. And that’s a good thing, considering that replacement ribbon cassettes are about $95 each. 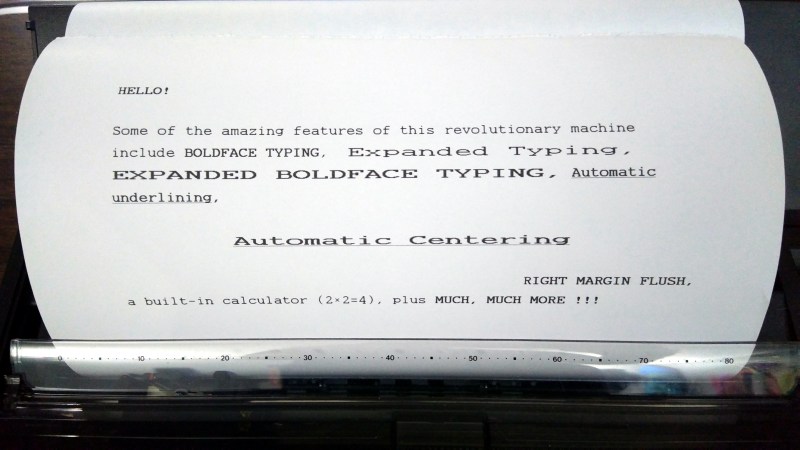 There are a ton of other reasons that this typewriter is still awesome today. First off, the obvious: distraction-free typing. Like all word processors, you get a buffer of characters that can be corrected before they’re committed to paper.

It’s very small and lightweight compared to most typewriters and word processors. Really, it’s the pinnacle of print on demand. Seriously, the only thing smaller that qualifies is an embossing label maker or Braille writer.

As you can see by the demo sheet, there are a ton of word processing features that take the guesswork out of making documents look pretty. It does bold, underline, and right margin flush with just a few extra keystrokes. There’s even a four-banger calculator if your adding machine is too far out of reach!

Physically speaking, the whole thing is adorable, especially the little print head. And it has ISO enter, which is labeled RETURN. I keep meaning to cut some of my fax roll down into sheets, but once I made a paper dispenser with two 3D printed triangles and a dowel rod, I was far less motivated. Also, it’s really easy to tear the paper off by just tearing it against the clear plastic ruler guide.

The only real cons of this machine are that I can’t connect it to a computer, and I can’t connect a more ergonomic keyboard to her. I’m good for about a page, single-spaced, and then my wrists start complaining.

Back to the Smoke Monster

After I opened it up and surveyed the damage, I found that one of the big capacitors had been what blew. I decided to just order all new electrolytics for it to get ahead of future problems. This was especially wise considering how difficult this thing is to put it back together.  The plastic ribbon cables are quite fiddly.

In the end, I replaced all but two of the electrolytics. One of them I just couldn’t find a replacement for. The other I couldn’t replace because the one I ordered ended up having too big of a footprint. I was so focused on getting short-enough replacements for the big boys, that I screwed that one up completely.

After replacing the caps I got my Hello, World on. Now I type on it whenever I can, usually about once a day. Naturally, I think more fondly of it because I nursed it back to health. Here’s to another thirty or forty years of distraction-free clacking, thermal-paper supply willing!

23 thoughts on “Clacker Hacker: Popping A Cap In A Brother EP43 Thermal Typewriter”