You might wonder why you’d take them to the drugstore. They were one of the places that would have a tube tester in a large cabinet. You’d look up your tube and it would tell you how to set the various dials on the machine. For example, you might have to plug the tube into socket #5, turn switch 1 to position 4, switch 2 to position B, and then switch C to position 9. You’d push a button and a big meter would show you if the tube was good or bad. If the tube was bad, you’d open the cabinet, pull out a replacement tube, and pay for it at the register. (Imagine having to do this with any given transistor in your cell phone.)

Tube Testing at the Shop

Of course, if you had a TV repair shop or you just had a well-stocked electronics bench, you probably had a tube tester yourself. You might not have had the big cabinet of spares, but then again your tester was probably at least somewhat portable by the standards of the day.

For example, the Knight tube tester was more or less the drugstore model with a smaller meter and a handle. The controls were a little more technically labeled than the consumer models, too. But you still had to look up a table, twist knobs, and throw switches. You really wanted to be sure to read the table correctly, too. Being off one row or getting data from two rows could possibly kill your tube under test.

My friend [Tom] had a different kind of tube tester for sale at a recent hamfest. Compare this Hickok tube tester to the Knight one up above. There is a conspicuous absence of switches. Of course, there are a number of sockets because you can’t force a tube into a different socket. The meter is sort of the same, too. But instead of a table, there’s a bin of around 300 punch cards and a card reader you can see near the bottom left corner of the machine.

The card reader doesn’t have a computer — at least, we don’t think it did. It was simply a set of contacts you’d normally find behind switches on a conventional tube tester. When you slid the card in, it would move between a set of contacts. When the card hit a stop, the plunger-like switch near the card reader would pop up, engaging the contacts through the card’s holes and fixing the card. Pushing down on the plunger released the card.

You can see a better picture of a few of the cards in the other picture.  Note that one of the cards was for a 17D4 tube. It tells you to use socket F and since it says, “card 1 of 1” it follows that some of the tubes needed multiple cards and tests.

The Price of Convenience

The Cardmatic shows up in ads in the late 1950s. The “new low price” for the model 121 was $250, so that implies that maybe it cost more at some point. Or perhaps it was relative to the more expenisve model 123. Sure, $250 doesn’t sound like much but adjusted that’s around $2,300 today. You had to be testing a lot of tubes to justify that kind of expenditure. For the average worker at the time, that was about a month’s take-home pay! And the 123A cost $470, even more! 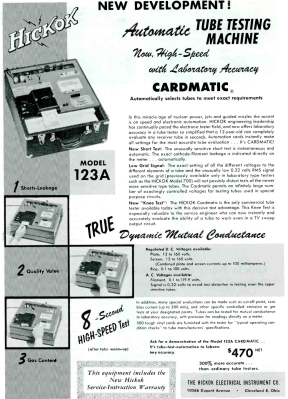 Of course, according to the ad you can see here, it would test the tube in only eight seconds. Well, eight seconds after the tube warmed up. They claim the device was 300% more accurate than an ordinary tube tester, but we have no idea how’d you’d prove or disprove that.

Thanks to [bandersentv], you can actually watch a video (below) of the machine in operation. That particular model is a 121, but they are very similar. There was also a military version, the AN/USM-118B.

We shouldn’t be surprised. Despite common misconception, most processing of punched cards didn’t happen with actual computers, even for computer punched cards. Life sure is simpler now. You can get a general-purpose component tester for almost nothing. Of course, it won’t test tubes — we don’t think — but if you build a tube adapter for it, please tell us so we can cover it.

Thanks to [Tom, N3LLL] for the photos of this great old piece of test gear.