Do you ever wonder how much of what we do you could figure out from scratch? Tying your shoe might seem 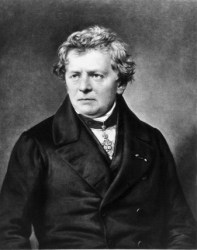 simple now, but kids have trouble mastering the skill, and dreaming it up for the first time is even harder. The same holds true for a lot of technology we use every day. Would you think up the computer mouse or even the computer if they didn’t already exist? Surely, though, one of the simplest and most useful math equations that is fundamental to electronics — Ohm’s law — would be easy to figure out, right? It is often the first thing you learn about electronics, but figuring it out that first time turned out to be quite difficult.

The fellow who discovered the relationship was Georg Ohm, a high school math and physics teacher from Köln. What you might not know is that the first time he published it, he got it wrong. But, lucky for us, he figured out his mistake and was able to correct it.

It isn’t Just a Good Idea…

Ohm’s law is easy. For a linear resistor, the current through the resistor is proportional to the voltage applied across it. The proportionality constant is the reciprocal of the resistance value in — no surprise — ohms. That’s just a fancy math way of saying I=E/R where E is voltage, I is current, and R is resistance. Of course, algebra will tell you that E=IR and R=E/I.

While that seems obvious today, in the 1800s, not so much. There had been some awareness of electricity dating back to ancient Greece. However, until 1800 when Volta created the “hydro-electric” battery — meaning it was a wet cell — there was no easy way to create a steady current for scientific investigation.

From 1800 to 1820, then, science was able to use a voltaic pile to generate electricity. But there was a big limitation. There was no way to measure the current flow in the circuit. In 1781 Henry Cavendish experimented with Leyden jars (basically a high-voltage capacitor) and glass tubes of varying diameter and length filled with saline. Having no way to measure current, he would use his body and note how strong a shock he felt. He noted that current was related to voltage but did not mention it to other scientists and it remained largely unknown until Maxwell published the result in 1879.

The current measurement problem resolved in 1820 when Oersted showed that a current would produce a magnetic field. That led Schweigger and Poggendorff to invent the galvanoscope in 1821. This is essentially a coil with a compass inside of it. Current in the wire would deflect the compass needle and the amount of deflection told you how much current was in the wire.

Ohm wanted to study the nature of electric current flow and built both a battery and a galvanoscope. His experiments aimed to describe the amount of current that would flow through a given length of wire. He would measure the current flowing from the battery using only his galvanoscope and then insert a length of wire and note the difference in the reading.

In 1825, Ohm announced his formula to the world in a paper entitled, “Preliminary Notice of the Law According to which Metals Conduct Contact Electricity.” Not exactly a click-bait title. However, there was a problem: the formula he had was incorrect.

Keep in mind that there were not all the units we are used to today, so Ohm’s formula was measuring V, the reduction in needle deflection caused by the test wire. The length of the wire X and the applied voltage M were key factors as well as the resistivity of the wire, R. The incorrect formula was:

With what we know today, you can look at this and immediately know it is incorrect. However, in 1825, that wasn’t so obvious. The paper was accepted for publication but before it went to print, Ohm ran new experiments with a different power source. He realized his formula was wrong, but it was too late.

The problem was the battery. While it might seem obvious today, in 1825 there wasn’t a general realization that a wet cell’s voltage will vary under load. Ohm’s friend Poggendorff suggested he use a thermoelectric battery — what we would call a thermocouple.

In “Determination of the Law According to which Metals Conduct Contact Electricity, Together with the Outlines of a Theory of Volta’s Apparatus and the Schweigger Galvanscope” Ohm got it right. (He liked the long titles.) The formula there didn’t exactly look like what we think of as Ohm’s law, but it actually is, if you account for the resistance of the power source. In modern notation, we would write:

Here, Rb is the battery resistance. In 1827, Ohm also published “The Galvanic Battery Treated Mathematically” showing that, at least, his ability to write good titles had improved. That’s all, right? 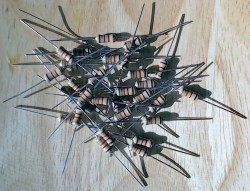 You would think that everyone would be happy to see Ohm’s law and would start to apply it immediately. That didn’t happen. Science was skeptical then — as you might argue it still is — and the establishment of the day thought Ohm’s law was too simple to have eluded the community for thirty-some-odd years. There was also strong sentiment that Ohm had rushed to formulation, and a distaste for his practical experimental methods. The establishment saw Ohm as — more or less – a poser.

The  German Minister of Education proclaimed that “a professor who preached such heresies was unworthy to teach science.” Others said that the work was a “web of naked fancies.”

For six years, the world continued to ignore Ohm’s law, for the most part. However, Pouillet published a paper in 1831 where he — without being aware of it — rediscovered Ohm’s formula. He was probably disappointed when, upon publication of Pouillet’s law, others pointed out that Ohm had done the same work years earlier.

You might think it is odd that Ohm published a wrong formula or Pouillet repeated an experiment, but things were a lot different then. Barlow, in fact, tried to solve the same problem in 1825 and had published a finding that current through a wire was inversely proportional to the square root of the wire’s length.

This result was incorrect but fit the data because Barlow failed to account for the internal resistance of the battery, as Ohm did. Even Barlow accepted that he was uncertain his law was correct. On the plus side, Barlow did invent Barlow’s Wheel which was a clever form of motor using a metal wheel, a magnet, and mercury.

In the end, Ohm’s work was acknowledged and he not only received the credit he was due, but his name is still on our lips every day.

If you want to read more details about Ohm, the Annual Report of the Board of Regents of the Smithsonian Institute for 1891 has the translation of an address given to the Royal Bavarian Academy of Sciences that covers the story in great detail. You’ll read that after his work was recognized, he began new experiments and made contributions to acoustics, too, although his acoustic law is not quite correct, apparently.

If you really want to go to the source, brush up on your German and check out this archive of Ohm’s original papers. While Ohm gets all the credit, Kirchhoff has some pretty important laws, too.

22 thoughts on “The Story Behind Ohm’s Law”