Where do old battle bots go to die? Well the great parts-bin in the corner of the workshop, where they await disassembly and use in other projects. But once in a while, if a battle bot is really lucky, they get pulled out again and put back into working order. So is the story [Charles] is telling about Overhaul 1, a hulk of a robot who was last see in fighting shape during the 2015 season of the show.

Having been succeeded by newer designs (Overhaul 2 and Overhaul 3), it’s a surprise to see some work being poured into these old bones. It didn’t escape the parts bin unscathed, having lost it’s wheels to another design called sadbot. What’s in place now are “shuffle drive pods”, a cam-based system that kind of crawls the robot along. They’re fun to watch in action in the video after the break, just make sure to turn your volume way down first. It’s no wonder [Charles] plans to replace them with newly-designed wheel modules. 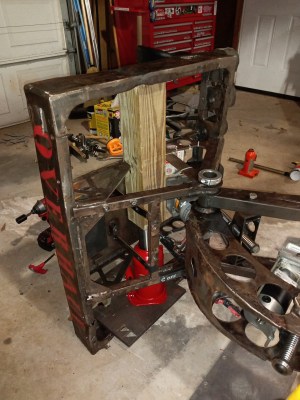 In the heat of a match these things take a lot of damage, and the frame of Overhaul 1 was still twisted and mangled. A hydraulic tire jack is the tool of choice as the damage was caused externally and needed to be pushed out from the inside. As a testament to how these things are built, any old jack just won’t do and a 20-ton unit was acquired for the purpose. A set of prongs on the front (called pontoons) was also bent inward and required a chain and a come-along to pull them out.

The nice thing about revisiting projects years later is that technology tends to move forward. We can imagine that the design work [Charles] has in progress for a new set of wheel modules is much easier, and the parts (motors, drivers, batteries, etc) of a much higher quality than when first built over half a decade ago. This is the first installment in the overhaul of Overhaul series, which we’ll be keeping an eye on.