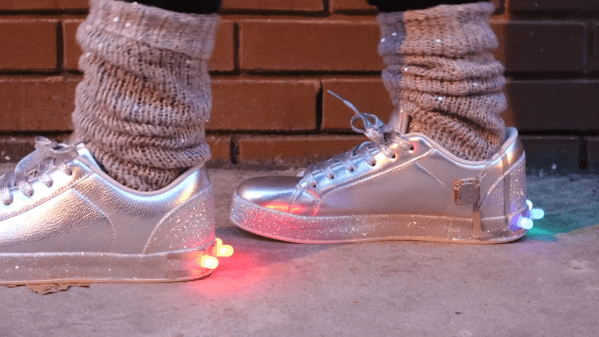 Normally when we see blinky projects these days, it’s using addressable LED strips with WS2812Bs, or similar alternatives. However, old-school blobby round LEDs are still on the market, and can still be put to great use. These DIY LED shoes from [TechnoChic] are an excellent example of just that.

The shoes use big 10mm LEDs that have color-changing smarts baked in. Simply power them up and they’ll fade between a series of colors. They’re run from a coin cell sewn on to the side of each shoe, with the LEDs jammed into the rear of the sole. A conductive product called Maker Tape is then used to create a circuit for the LEDs and the coin cell, along with a pressure switch inside each shoe. When the wearer puts weight on their heel, the switch conducts, lighting up the LEDs as the wearer takes each step.

This isn’t the first time we’ve seen a pair of shoes bedazzled with LEDs, but it’s arguably the easiest version of the concept to grace these pages. This is a quick way to create interactive flashing LED gadgets, and a great way for beginner makers to jazz up their projects.