[Timon] just bought a new PCB holder setup for his desk. It’s one of those spring-loaded jobbies that uses strong magnets to hold it up off of a work surface, and is made of metal so that you can reflow solder with it. It might be a clone of the PCBite, but frankly I’ve seen similar projects everywhere — it’s hard to say who is copying whom these days. And anyway, that’s not the point. 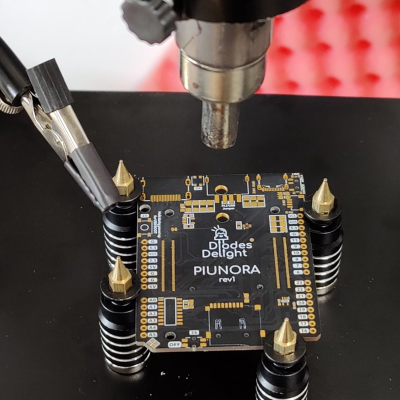 What struck me about the holders was their tops: they’re repurposed 3D printer nozzles. That’s a fantastic idea because they’re non-magnetic, heat tolerant, relatively uniform, and probably dirt cheap in Shenzhen, where the designer of this board almost certainly lives. Maybe he or she even works in a 3D printer factory? Who knows? But the designer almost certainly looked around for something that would fit the bill, and found the nozzles.

Indeed, there’s been a lot of innovation in all things board-holding coming out of China over the last decade. I can remember when the state of the art was a vise-like affair. (I still like my homebrew Stickvise clone for low, square jobs.)

But with cell phone repairs requiring the ability to hold and reflow ever stranger board shapes, there’s been a flourishing of repositionable holders. The pawn-pillar designs are cool, but their utility rests firmly in how strong the magnets are. (I wouldn’t buy the one linked, for instance, without trying it first-hand.) I really like the look of these jobbies, which have springs to maintain tension. (Will the 3D-printed plastic jaws hold up to multiple reflows?) Anyway, it’s no coincidence that the inventors of these devices are in the cellphone-repair capital of the universe.

The old saying is that necessity is the mother of invention. But what if, like with real estate, it’s location, location, location? You dream up solutions to problems around you, using parts that you’ve got on-hand. If that sounds a little fatalistic, consider that you can also change your surroundings, either physical or even virtual. Are you in the middle of the right challenges and opportunities?

21 thoughts on “Where You Are Influences What You Invent”