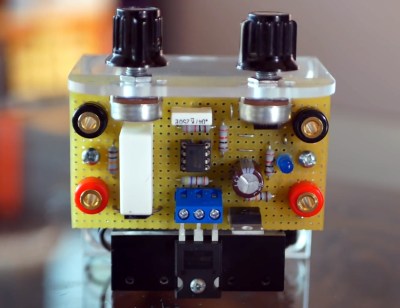 As [Jay] explains, wiring up a basic ignition coil is very simple. Usually there are just three terminals: the positive and negative inputs, and a high-voltage output. But in this case since he’s driving two coils, he’s actually wired one backwards. Bolted into a nice acrylic holder and with banana plugs to provide the roughly 18 – 25 VDC input, you’ve got a compact and reliable high-voltage source. The driver itself is an evolved version of a circuit he’s used in past projects, and beyond the addition of the Bluetooth audio input, now features a snubber circuit to help keep the 555 from getting cooked.

So what’s the result? Well a lot of gorgeous sparks, for one thing. But with audio playing through Bluetooth, the arc between the dual coils will act as a plasma speaker. The output is clear, but not terribly loud. According to [Jay] that’s because the ignition coils weren’t meant to be driven at such high frequencies, with the result being reduced output voltage. But as demonstrated at the end of the video, it turns out there’s more than one way to get audio out of this rig; with an antenna connected to the output of the coils, the system becomes a radio transmitter.

In the market for more high-voltage fun using the 555? Check out this DIY plasma ball driven by the fifty year old integrated circuit that hardware hackers just can’t get enough of.