We could all use a hug once in a while. Most people would probably say the shared warmth is nice, and the squishiness of another living, breathing meatbag is pretty comforting. Hugs even have health benefits.

But maybe you’re new in town and don’t know anyone yet, or you’ve outlived all your friends and family. Or maybe you just don’t look like the kind of person who goes for hugs, and therefore you don’t get enough embraces. Nearly everyone needs and want hugs, whether they’re great, good, or just average.

So what makes a good hug, anyway? It’s a bit like a handshake. It should be warm and dry, with a firmness appropriate to the situation. Ideally, you’re both done at the same time and things don’t get awkward. Could a robot possibly check all of these boxes? That’s the idea behind HuggieBot, the haphazardly humanoid invention of Katherine J. Kuchenbecker and team at the Max Planck Institute for Intelligent Systems in Stuttgart, Germany (translated). User feedback helped the team get their arms around the problem.

A Different Kind of Soft Robotics

In the context of therapeutic and elder care robots, they of course must be both gentle and responsive. So Dr. Kuchenbecker and team are starting off with hugs and haptic interactions. Hugs are somewhat simple to replicate compared to complex movements like bathing someone, or turning them over in their bed. 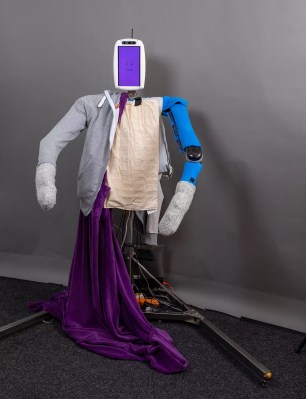 HuggieBot has sensors in its arms to ensure that it gives a friendly hug and not a life-threatening squeeze, though we wonder if there are any fail-safe measures in place if a sensor goes bad. Another sensor on HuggieBot’s back detects the human returning the hug. When they lift up their arms or lean against the robot’s arms, it breaks the embrace. Hopefully.

Dr. Kuchenbecker and team knew that HuggieBot should be soft, warm, and roughly human-sized. Most importantly, it should know when to release from the hug. Something else HuggieBot can do that we hadn’t considered — it can adjust to a person’s height and posture the way a human would.

Physically speaking, HuggieBot looks about as huggable as a robot could. It is dressed comfortably in a gray hoodie and long purple skirt, and its tablet face bears a pleasant expression. HuggieBot’s upper body is both inflated and heated to make it more pleasant to hug. They even wrapped the arms in foam and put socks on the hands. We assume that HuggieBot is half dressed in order to show what’s underneath.

At the end of the day, you’re still getting hugged by robotic arms, which is more than a little bit scary. But they seem to do a nice job, which you can see in the video below featuring an earlier version of HuggieBot. It doesn’t just pull you in, it waits for your approach before closing its big industrial arms around you.

Hugs are about both physical and emotional warmth, and although it’s more difficult to grow an emotional bond with a robot or even an inanimate object, it’s definitely not unheard of. Think about kids with their stuffed animals and security blankets. Or Tom Hanks and Wilson, his pet volleyball.

Let’s play devil’s advocate here. It’s not as though every human gives perfect hugs just because they’re human. We all know someone who hugs too hard or too long, or too often. What if you could train a robot to hug you exactly how you want to be hugged? If we’re serious about hugger robots becoming a thing, there are a lot more things to consider that would make the hugs even more pleasant and human. Like if you were crying, the robot might throw in a few pats and some open-handed back rubbing for extra comfort. It’s not that it’s a difficult problem to solve. The hard part is getting people to accept the idea and expose their viscera to a machine.

In Japan, robots are already playing a part in elder care. A nursing home in Tokyo has a whopping 20 different robots roaming around. Many of them are designed to play games and carry on conversations with the residents, as well as leading them in exercise routines.

Would you hug a robot? Would you let a robot brush your hair? I would jump at the chance to hug HuggieBot, as long as Dr. Kuchenbecker was nearby to help out if things went south. In fact, I think robot hugs are better than no hugs at all, especially for lonely senior citizens who might really benefit from a friendly squeeze on the regular.

But that’s kind of an innocent take. Do we really want to go down the road of robotic intimacy? As with many things, it depends what people do with it.

29 thoughts on “Can Robots Give Good Hugs?”