Among his many interests, [Dave Jones] likes test and measurement equipment. He recently posted a few videos on his EEVblog exploring the reasons why Fluke voltmeters are so expensive. In the process, he stumbled upon an interesting hack for the Fluke 77.

The Fluke 77 was introduced in 1983, and is an average responding meter in the AC modes. This model has become a de-facto standard for use in maintenance depots and labs for equipment which has very long lifespans — think military and industrial gear, for example. Many test procedures and training materials have been designed around the use of the the Fluke 77. The cost to change them when a new and better meter comes along is usually so prohibitive they might as well be cast in stone — or at least hammered into 20 pound fanfold paper by a WordStar-driven daisy-wheel printer. But for those unburdened by such legacy requirements, Fluke has the 17x series of True RMS reading meters from since the beginning of this century. These meters bear a strong visual resemblance to their siblings in the 7x family and are substantially interchangeable but for their AC measurement methods. 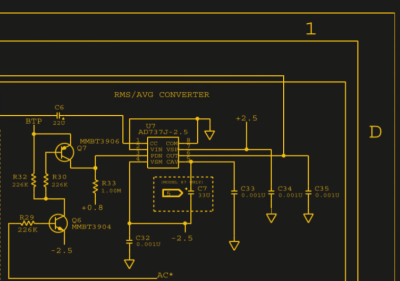 In the process of tearing down a Fluke 77 meter for another reason entirely, [Dave] finds that the resemblance it not just visual. Not only is the 77’s PCB labeled 17x, but there is an Analog Devices AD737 True RMS to DC converter IC on the board.

What gives? Why would they go to the expense to put this chip in an average responding meter?

A bit more digging into the data sheet reveals this chip can measure in three different modes: true RMS, average rectified, or absolute values. Selecting true RMS mode requires adding just a single 33 uF capacitor. Sure enough, in the Fluke schematics this is clearly shown as an optional load.

Not surprisingly, [Dave] does the modification and it works. The only downside is that after you make this change, you have to perform a complete recalibration of the meter. Annoyingly, there doesn’t appear to be any way to just calibrate the AC measurements, for example. Unless you’re a recovering Test Equipment addict like [Dave], you probably don’t have all the gear nearby to perform this calibration yourself — something to keep in mind if you try this at home. Another thing to note is that this hack was done on a modern Fluke 77 IV meter. If you have a Fluke 77 from 1985, this hack doesn’t apply.