It doesn’t happen all the time, but over the years we’ve noticed that once we feature a project, a number of very similar builds often find themselves in our tip line before too long. Of course, these aren’t copycats; not enough time has passed for some competitive maker to spin up their own version. No, most of the time it’s somebody else who was working on a very similar project in isolation, and who now for the first time realizes they aren’t alone.

Thanks to this phenomenon we’re happy to report that yet another 3D printable magnetic levitation switch has come to light. Developed by [famichu], this take on the concept is markedly different from what we’ve seen previously, which in a way makes the whole thing even more impressive. It’s one thing for multiple hackers to develop similar projects independently of each other, as the end goal often dictates the nature of the design itself. But here we’re seeing a project that took the same core concepts and ran in a different direction. 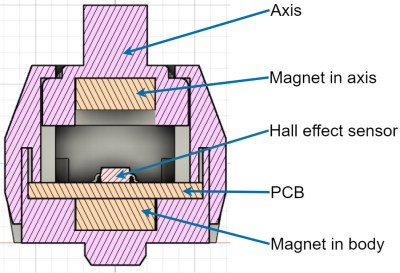 So what makes the MagLev Switch MX different from [riskable]’s recently released void_switch? In a word, convention. It seems that [famichu] wanted to create a magnetic switch that operated in more or less the same way a traditional Cherry MX switch does, while the void_switch represents a re-imagining of how keyboard switches should work entirely. So for example, rather than putting all the Hall effect sensors on the main PCB so there’s no need to make an electrical connection to each individual switch, each MagLev Switch MX is pinned and must be wired together to form a matrix.

Internally, [famichu] has come up with a unique arrangement wherein the Allegro A1304 linear Hall effect sensor is actually placed in between two opposing magnets that stand in for the traditional spring. When the key is depressed the sensor will pick up the magnetic flux environment changing around it, but interestingly, the schematic for the keyboard PCB would seem to indicate that the senors are not being read directly by the microcontroller. Instead, their output is being used to trigger MOSFETs on each row of the matrix.

In terms of getting them printed, the MagLev Switch MX has fewer parts than the void_switch, and [famichu] recommends printing them on an MSLA machine. This greatly accelerates the printing time compared to the FDM-printed void_switch, as there’s no time penalty for filling the entire build volume of the printer for each run. As for customization, the Fusion 360 design files have been included in addition to the standard STL/3MF models. But for our money, nothing quite beats using OpenSCAD’s customizer capability for a project like this.

The big takeaway here is that there’s clearly more than one way to make an open source, 3D printable, magnetic MX-style switch.  We’re very excited to see both projects develop further, especially since a little birdie tells us that [riskable] has taken a close look at this design and has a few notes to pass on to [famichu] based on his experiences developing the void_switch. With these two magnetic mavens collaborating, the future of bespoke input devices is looking very bright indeed.

Thanks to [Stephanie] for the tip.