In 1980, Logitech started selling a round, three-button input device known the Depraz mouse or Swiss mouse, which was made by — you guessed it — a Swiss company called Depraz. At the time, Logitech was primarily a software development outfit, but the success they saw in selling the Depraz mouse led them to leave logic and looping behind in order to pursue peripherals permanently. 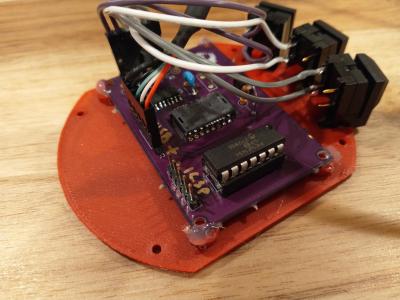 [John Floren] recently decided to make a modern clone called the Bellwether mouse. You may remember that [John] previously restored a vintage Depraz to working condition. The only problem is that ‘working condition’ for a 40-year-old mouse is underwhelming on a modern computer.

The Bellwether mouse sports a high-end Pixart PMW3389 sensor and uses a PIC16F1454 for the controller. The most complicated part was dealing with voltage levels, because the PIC wants 5 V and the sensor only 2 V. The firmware is a mix of Microchip’s USB HID demo code and [Daniel Kao]’s Arduino code for the PWM3389 sensor.

Unlike the original Depraz’s male DE-9 connector, this updated version connects via USB. We like that [John] learned FreeCAD in order to make the body, and especially that he glued fishing weights to the underside for more heft. Check it out in action after the break. We were most curious about those switches, which at first glance look like they could be keyswitches with DSA keycaps. But no, they’re just some cool switches from the depths of Digi-Key.

Want to print yourself something more ergonomic? Perhaps you’ll click with Ploopy, the open-source trackball.

4 thoughts on “Depraz Mouse Clone Has A USB Tail”