Pinball machines are large, complex, and heavy boxes of joy and delight. However, when you don’t have the money or space for one, you have to make your own mini Raspberry Pi-powered one.

With access to a local makerspace and a bit of extra free time, [Chris Dalke] had plans to capture the flavor of a full-scale pinball machine in a small package. Laser-cut Baltic birch forms the enclosure, and a screen makes up the playing field rather than a physical ball. An Arduino Uno handles the three buttons, the four LED matrixes, and a solenoid for haptic feedback, communicating 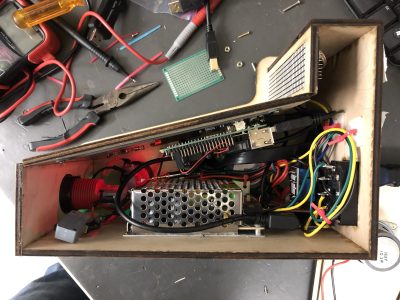 with the Pi via serial. Unfortunately, even with a relatively decent

volume inside, it is still a tight squeeze.

Rather than use an off-the-shelf pinball game, [Chris] wrote his own in C using raylib and raygui, two handy libraries that can be included in the project quickly. SQLLite3 writes high scores out to disk. All in all, an inspiring project that has a very high level of polish.

8 thoughts on “Tiny Pinball Is As Cute As Pi”