Regular readers of Hackaday will know that the projects we feature are generally of the high-tech variety. Microcontrollers, 3D printed parts, embedded Linux, lots of wires, that sort of thing. But that’s not to say we don’t appreciate the somewhat more visceral builds out there; after all, hacking is about creative problem solving and thinking outside the box, and none of that is limited to how complex the fix actually is.

Take for example this quick hack that [R. Preston McAfee] recently sent our way. Looking for a way to check how much fuel was left in his outboard motor’s small portable gas tank without crawling back to look at it, he decided to rig it up with a sending unit. While they’re technically designed for larger tanks which are permanently installed into a boat’s hull, he reasoned there was nothing about the float sensor that would keep it from working in his case so long as it could be safely mounted. 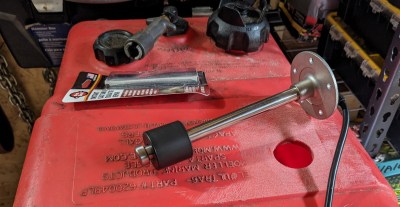 To that end, [Preston] started by cutting a 38 mm (1.5″) hole in the thickest part of the tank, and sanded the area around the opening to smooth things out. He then measured the depth of the tank at that point, and ordered an appropriately sized float sensor. He drilled out the holes for the five mounting bolts, and inserted them through the larger whole so their heads would be inside the tank. By holding the exposed threads with a pair of vice grips he was able to crank the nuts down on each bolt to form a tight seal to the gasket, though it should be noted that the resulting damage to the threads will likely make it difficult to remove the nuts in the future.

Admittedly this is a pretty simple fix, but it’s well thought-out and we appreciate the effort [Preston] put in to documenting the whole process. We’ve certainly covered more elaborate ways of seeing what’s left in the tank, but just because a solution is flashier doesn’t mean it’s necessarily any better.

23 thoughts on “Hacking A Fuel Sensor Into A Portable Tank, Literally”